On a sometimes bright, sometimes cloudy Thursday in June, the Cambridge University Bowmen met for the annual Cuppers match. This match between college teams of two (and some mixed teams) decides who is awarded the prestigious shield and (as we discovered) moderately-hard-to-get-a-noise-out-of horn.

Shooting on the lower field so as not to disturb end of term revelries, we had an easy going shoot, with music and friends, all secretly eyeing up the BBQ that we knew would be wheeled out presently.

But first it was time to shoot, with Wolfson, Peterhouse, Trinity, Sidney-Sussex all fielding college teams, with independents forming the fictional Khrists (Kings and Christs) and another team. Clare managed a second team for the first round. First shot was a seeding Warwick round, followed by the head to heads. The first round said goodbyte to Wolfson and Khrists 6-2 and 6-0 to Sidney and Peterhouse respectively.

In the end though Trinity managed to resolve their differences, squeaking in above Clare's defending team to win Cuppers for the first time in nearly 60 years 5 - 1 (although each end was close). Third went to Peterhouse who beat Sidney-Sussex 6 - 0.

It was a good day for records with Cass, Andrew, Jack, Liam and Yang all winning new records on longbows, compound, barebow and recurve respectively.

And with that it was time to feast at the BBQ, along with some sad goodbyes (and promises to return) from those about to graduate. I think it is fair to say a grand day was had by all and we look forward to next year's shoot!

On the 8th and 9th of June, a team of 11 archers from CUB travelled to Lilleshall to compete in the final event of the student archery calendar this year, BUCS Outdoors.

The conditions were far from ideal on Saturday, with strong rain and winds causing some archers at the competition to score no points at all on their first distance! But everyone from CUB powered through and finished the competition, and produced some impressive results.

Yang Pei finished in third place in novice gents recurve, winning a bronze medal, and breaking 1000 points! He added a silver medal to his collection from the novice team competition, alongside Sheyna Cruz and Thomas Burridge, this being the club's best placing in this event in recent history, the previous best being third place in 2012.

Individually, our seniors, while not bringing home any medals, placed and shot well, with jack Atkinson and Chris Guerin finishing 6th and 9th in the hotly contested gents compound category, Kimberley Callaghan finishing 7th in ladies barebow, Andrew Browne finishing 5th in gents longbow, and Cass Lim finishing in touching distance of her first WA star and setting a pb! A much needed pub trip for food and warmth happened afterwards!

On the Sunday, there was a WA 70/50m round followed by head-to-head eliminations matches, and while a couple of us didn't quite realise that it was an early start and so arrived during sighters, there was great shooting from CUB in the ranking round, with Kimberley seeding 3rd, and Jack 8th.

There were plenty of exciting head to head matches, which saw Yang left as the joint last novice standing in the very competitive gents recurve competition, and Cass putting up a good fight against Team GB's Eleanor Piper, but ultimately losing to her in the third round. The highlight of the day for CUB was Chris' appearance in the bronze medal match for gents compound, and while he didn't win, he did shoot a pb for the match round.

A good weekend was had by all both on and off the shooting line and it was a great way to end the year's university competitions. Many thanks must be said to the hosts and work party, as well as to Jack, Siling and Robert for driving!

On the 18th of May, less than a week after Varsity, our archers travelled up to Leicester to take part in the final BUTTS event of the year. The shoot was held at Bowmen of Glen and hosted by Loughborough. Experienced gents shot a St. George round, experienced ladies and novice gents shot an Albion, and novice ladies shot a Windsor.

The novice team, consisting of Yang Pei, Thomas Burridge, Siling Zhang and Lukas Cincikas, finished in second place with a total score of 2606. Yang and Siling shot very well and achieved bronze medals in the novice gents and novice ladies categories, with scores of 722 (Albion) and 639 (Windsor) respectively.

Our experienced (non-compound) team, consisting of Cass Lim, Robert Spencer and Kimberley Callaghan, also shot well on the day but finished in 6th place due to having only three archers rather than four. Kimberley shot especially well and achieved a silver medal in the experienced ladies barebow category, with a score of 516 (Albion). In the experienced gents compound category, Chris Guerin scored 870 which put him in third place.

Despite a bit of rain, we all had a good day of shooting, with the novice team putting in another strong performance. I have really enjoyed shooting with everyone at the BUTTS events and look forward to meeting them again at the BUCS Outdoor Championships in a couple of weeks. 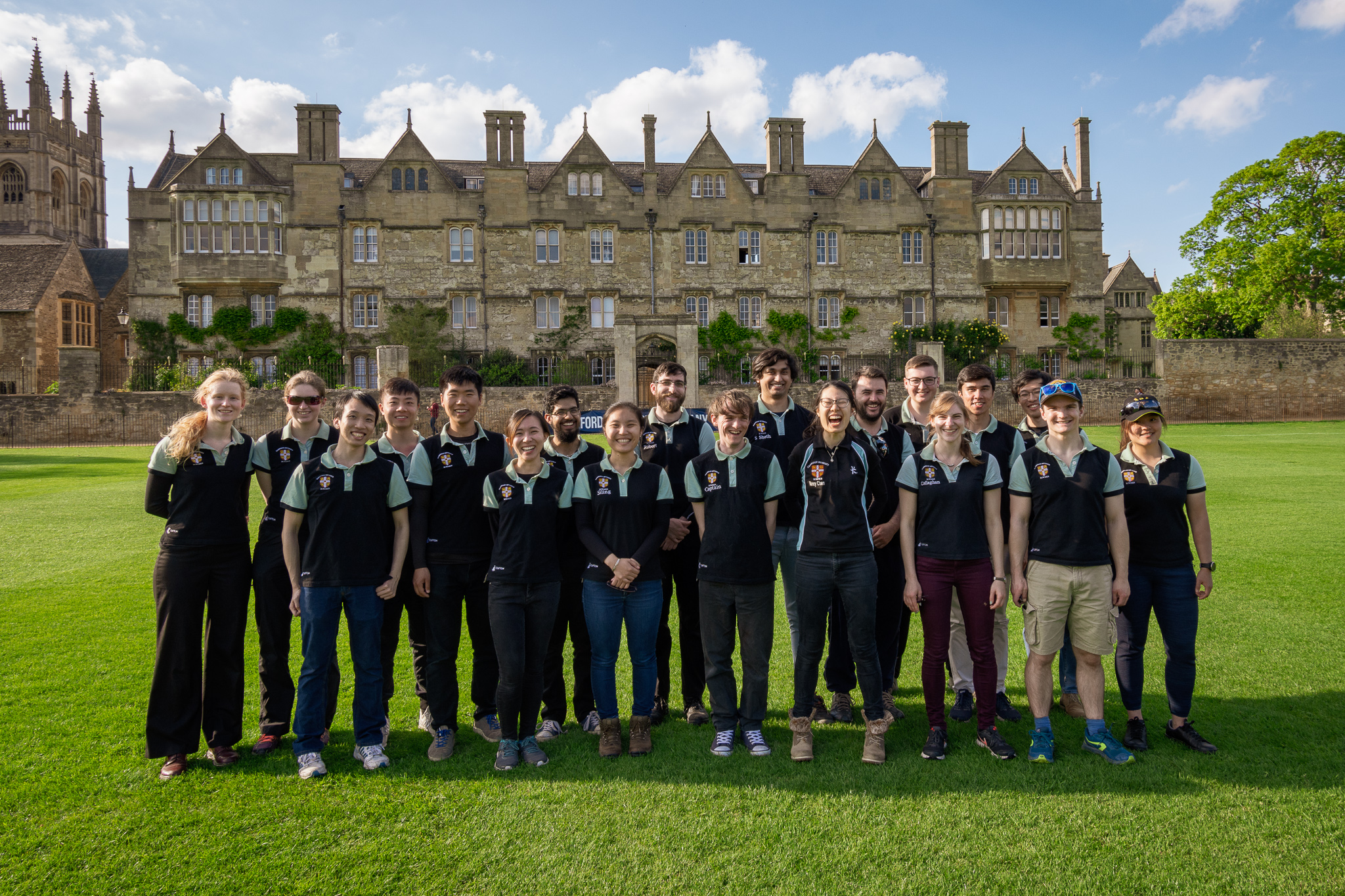 On the 12th of May, we travelled to Oxford for the 70th annual Varsity match against the Oxford University Company of Archers (OUCofA). The match took place at the Merton field right next to the famous Christ Church in Oxford. After a whole day of lovely sunshine and shooting, our bowmen achieved many great results!

Our experienced team scored a total of 3076, with Eleanor Brug (906 Windsor), Cassandra Lim (766 Windsor), Yang Pei (745 Albion), and Robert Spencer (659 Albion). Unfortunately, we lost to the OUCofA archers by 277 points. However, a massive congratulations to Eleanor Brug, who was not only the highest scoring archer in the whole recurve category, but also raised the club record by 8 points!

For the novices, our team made an excellent performance in their first outdoor season with a total score of 2462. The team consists of Yang Pei (745 Albion), Thomas Burridge (611 Albion), Siling Zhang (566 Windsor), and Lukas Cincikas (540 Albion). Despite their amazing effort, we still did not match the 2628 made by the OUCofA novices.

Two other club records were set by Jack Atkinson (compound) and Kimberley Callaghan (barebow) in their respective categories. A big congratulation to both of them! Also, an honourable mention to our captain, Andrew Browne, who was just 5 points away from winning the longbow challenge! Finally, congratulations to everyone who made the teams and qualified for BUCS Outdoors!

As my second Archery competition ever, I had an amazing time with both the Oxford archers and our Cambridge bowmen! A big thank you to the OUCofA for hosting this year's annual Varsity match, and I hope to see everyone again in Cambridge next year!

On the 31st March, three of the clubs best* recurve archers attended the annual British University Team Championships hosted by Reading Knights Archers. Having already lost an hour's sleep from the peculiarities of British Summertime, our intrepid archers set off bleary eyed in the early morning light. Having arrived, registered and assembled, the competition began with a Bray I ranking round, with our team ranking 28th out of the 32, coming up against stiff competition from the other student teams in attendance. Despite a less than ideal ranking round, it represented a personal best for Sam (224), and Robert and Shivam followed closely behind (222 and 205 respectively). After a short lunch break, the competition resumed with the highly anticipated, fast-paced, "Beiter Hit and Miss" knockout rounds. Cambridge were up against the #5 seeded team, Surrey, who ranked with a whopping 788 points. Unfortunately the hopes of an underdog victory were quickly dashed, with Surrey scoring 12 hits from 24, versus Cambridge's single hit (kudos to Robert for our single gold disc brought home). Following our swift exit from the tournament, the team stayed to cheer on friendly teams' Imperial College and Oxford in their first rounds before hitting the road home. The team arrived back in Cambridge just in time to help pack up the range and head to the pub for a well deserved drink. After all - how else am I supposed to put a positive spin on this article?