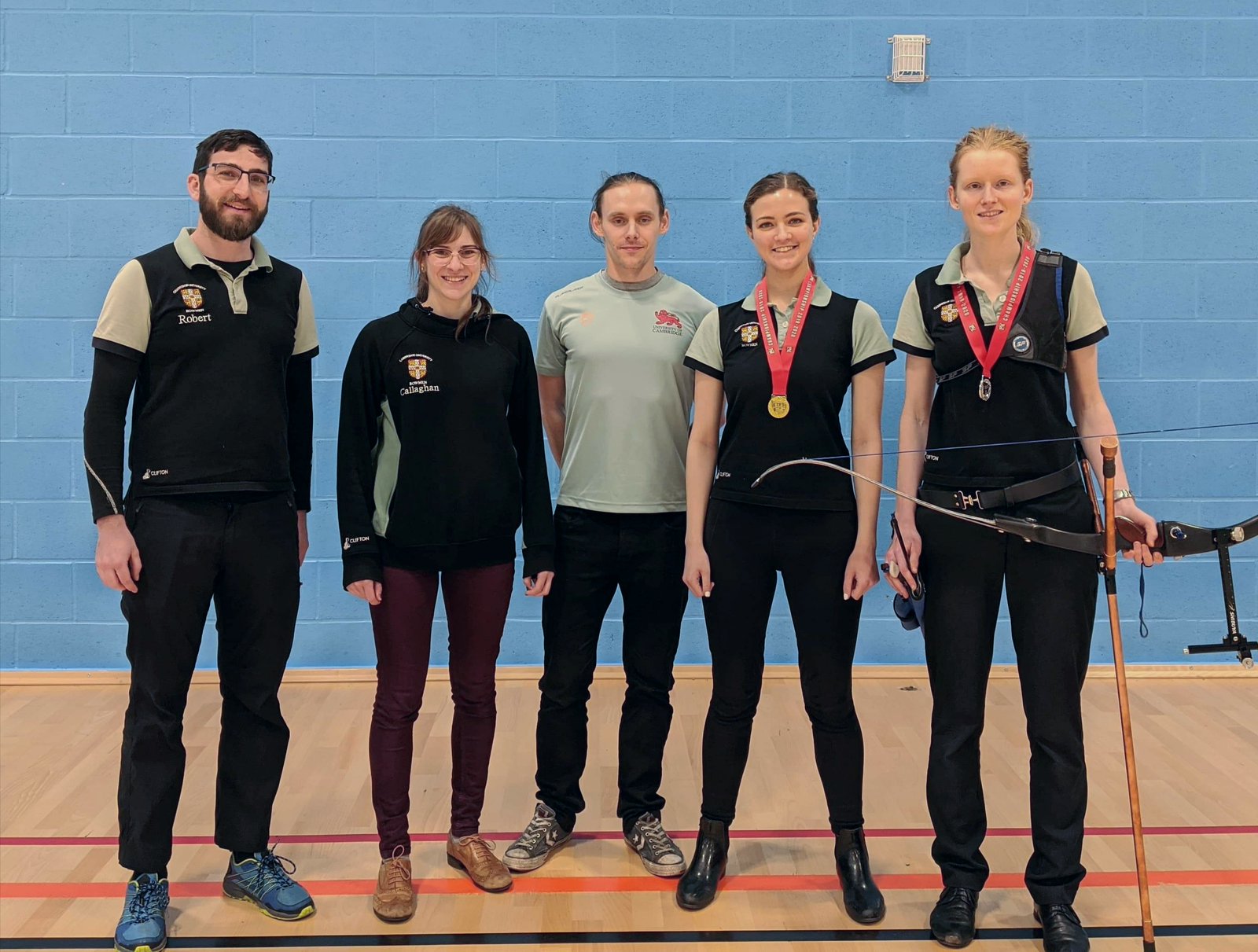 On the dark and rainy morning of Saturday, March 14, our five BUCS qualifiers--Robert Spencer, Kimberley Callaghan, Liam Pattinson, Eleanor Brug, and Cameron Krulewski--assembled at the Sports Centre at an egregiously early hour to head to Warwick for the finals. Robert was our valiant driver, and he competed in the first session while the rest of us overlooked from the balcony, alternately sending good vibes and napping on the floor. He shot well and finished 65th.

By the start of the second session, the other four archers were marginally more awake, and at least significantly more caffeinated. Intermittently shooting, snacking, and socializing, they persisted through the twenty Portsmouth ends and all moved on to the head-to-heads in the evening. Thanks to considerable encouragement from the rest of the team and from other friends, they each did well and advanced in their brackets. All told, Liam finished 9th in Barebow Men's, Kimberley claimed 8th in Barebow Women's, and Eleanor and Cameron each made it to the final rounds of their head-to-heads to win silver in Recurve Women's and gold in Barebow Women's, respectively. Eleanor, Kimberley, and Cameron also comprised the 7th place Non-Compound Women's Team at the event.

It was a long day, but the team departed with some shiny medals to show for it, and it concluded with a customary stop at McDonalds, where the archers were finally able to relax after confirming that they had not, in fact, lost the car keys. We are very proud of our archers for their impressive work, and for their unceasing determination and support for each other especially amidst the uncertainty of the situation around COVID-19. This strong showing at BUCS was a great way to end the indoor season and we wish all our archers the very best over the next weeks. 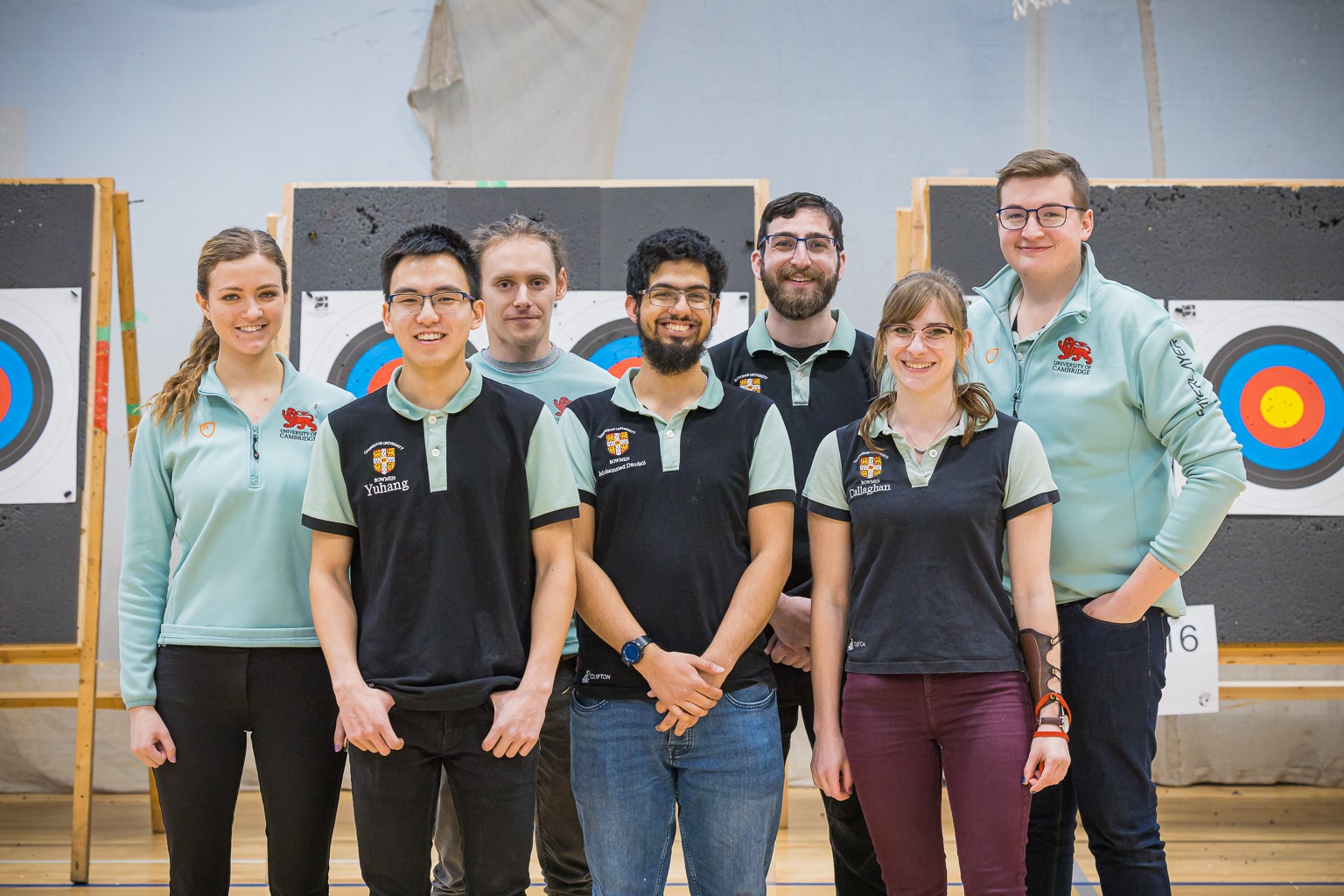 On a Sunday blessed with unusually good weather, the club headed up to Birmingham for the final match of the indoor season, the BUTTS League Indoor Championships. The Coronavirus was in its full glory, however this didn't dampen the spirit of our brave bowmen, bowwomen and sleep deprived novices. A Portsmouth round was first shot, fuelled by some much needed breakfast wraps from Maccies, and we pleasantly outperformed our expectations with many archers achieving PB scores. Our barebow ladies Kimberley and Cameron were able to once again display a dominating performance, bringing back a silver medal and a bronze medal, Liam took 4th place in the Gents category. In the novice Gents category, Andy and Sean again engaged in friendly competition with each other and snatched a bronze medal and 5th place respectively. Overall the experienced and novice teams finished in 6th/13 and 3rd/12 on the day respectively, putting in a great performance on behalf of the club. The icing on the cake was the final league scores of division 1, with Cambridge novices finishing in 3rd place overall after climbing a few places following the previous leg, and the experienced team finishing 6th

To keep the beef going in true Oxbridge style, the team marched in a wedge formation and furiously shouted the name of their archenemy, before challenging them to the 71st Varsity match in front of an amazed audience. The gauntlet was formally thrown down by delivering a hand-calligraphed invitation penned by our very own Vicki Hodgson, sealed in light blue wax.

In the second session, Liam, Yuhang, Sean, Andy, Cameron and Kimberley shot an Olympic style head to head round. Kimberley and Andy were able to make a few nerve wrecking comebacks, beating their opponents to progress to the gold medal matches. After some of the best shooting we've seen, both archers were able to deliver strong pressure to their fierce opponents, before coming home with a silver medal each.

All in all, it was a day of great archery and sportsmanship. CUB archers will have their medals delivered in a week, as the team ultimately "did a Cambridge" and missed out on the Annual BUTTS Ball. Oh well, you don't get everything you want in life, so we'll just have to make do with medals instead! 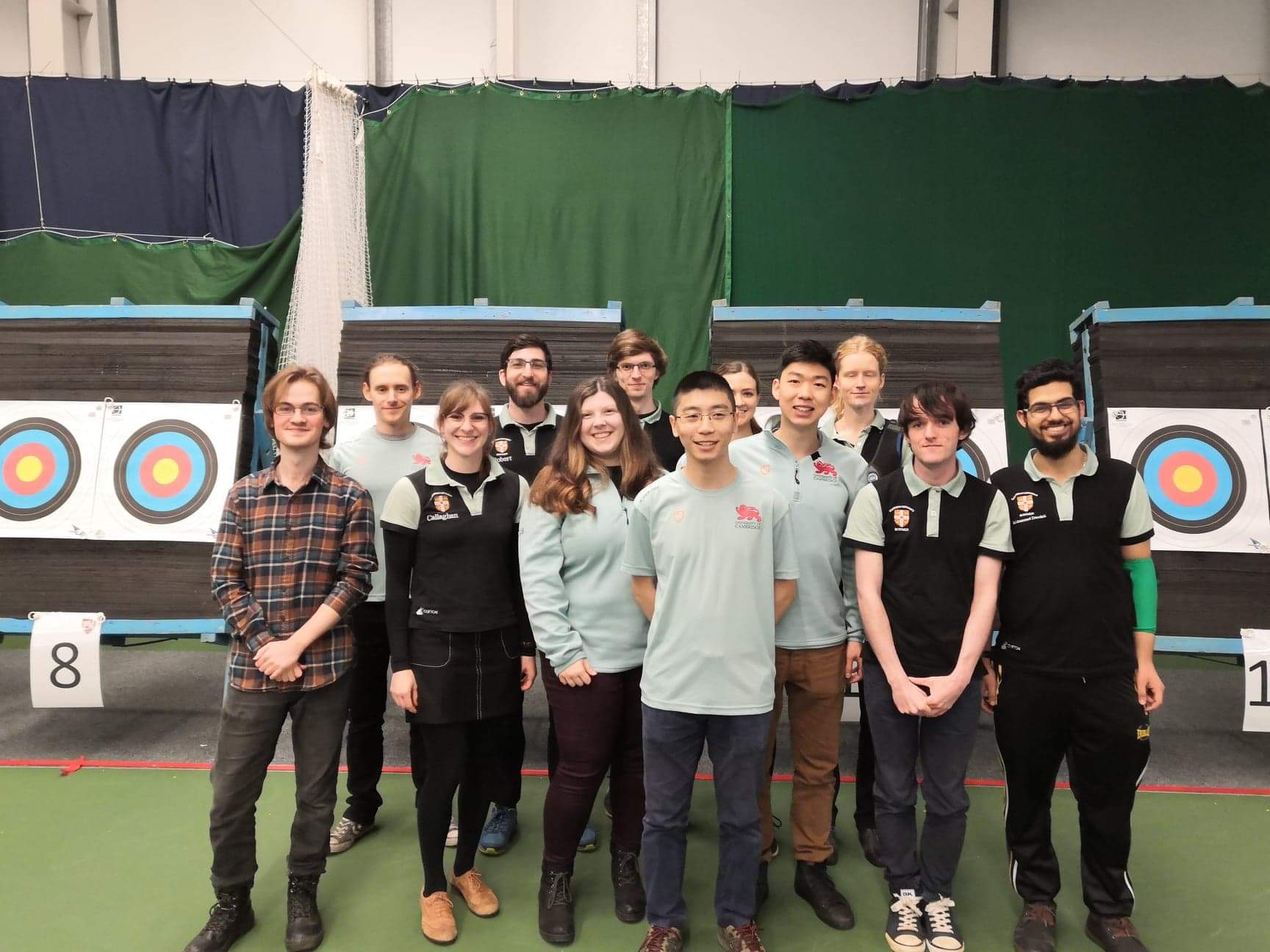 On the 22nd February 2020, 12 of the Cambridge University Bowmen made the trek out to Bristol for the Southern BUCS qualifiers. The CUB team all enjoyed themselves and are very thankful to Bristol University and the BUCS team for putting on a great day, with very few equipment failures from the archers.

The novice team put in a fantastic effort, coming 7th out of 20 universities! Well done to Vicki Hodgson, Andy Cai and David Stapley for their shooting. There was also success in qualifications, with 5 archers getting into BUCS finals. We wish Eleanor Brug, Kimberley Callaghan, Cameron Krulewski, Liam Pattinson and Robert Spencer the best of luck in the finals!

A few of our notable scores from the day include Robert Spencer coming 65th/280 male recurves, Eleanor Brug coming 11th/177 female recurves and Kimberley Callaghan coming 2nd/97 female barebows with a new club record. We think all 12 of our archers did incredibly well with several new PBs and club badges claimed and we wish them the very best going into the outdoor season! 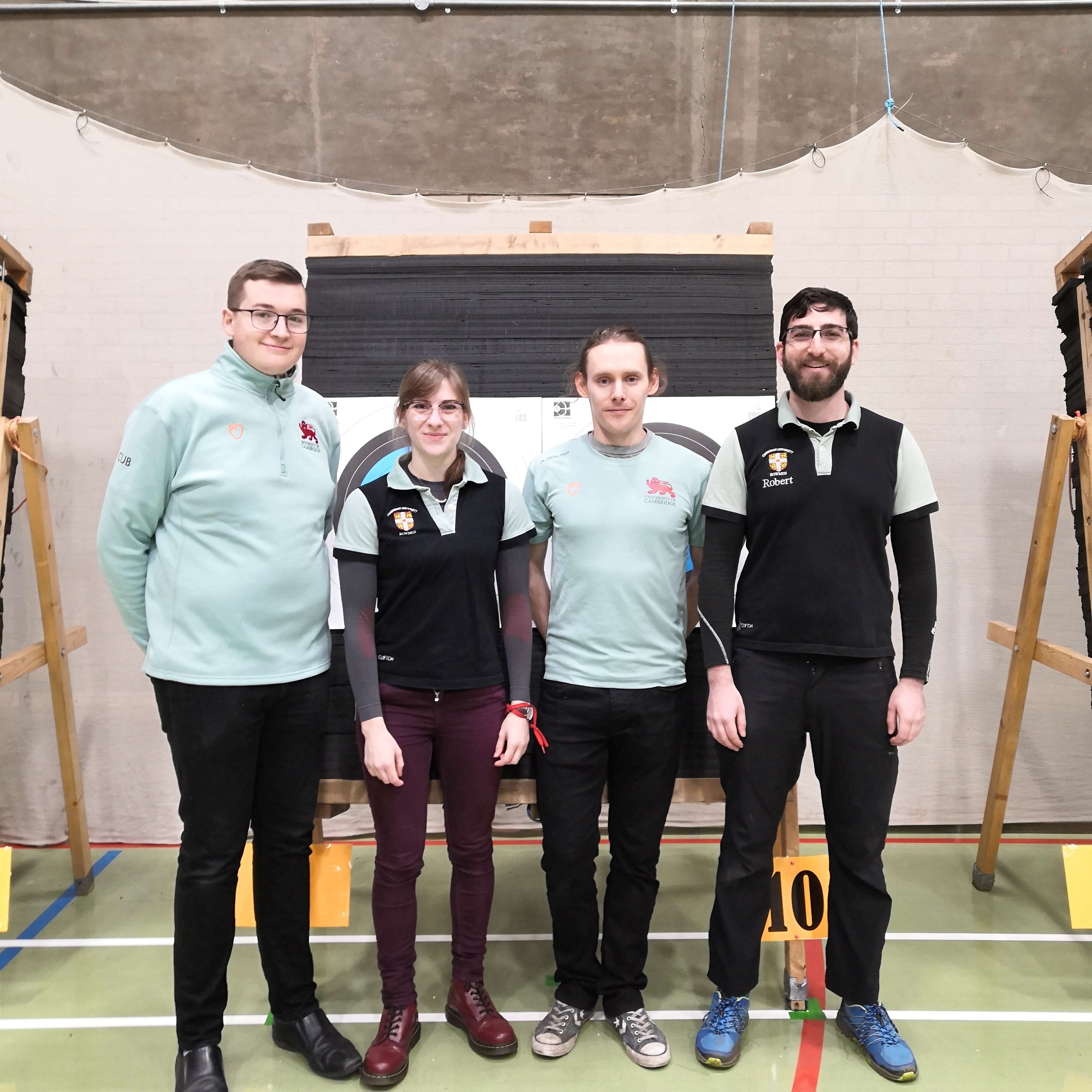 It was a dark and stormy day when five intrepid Bowmen set out from Cambridge to St Ives. Storm Ciara was in full swing and the elements were raging. Nonetheless four Cambridge University Bowmen and one University and City Bowman (that we regularly see) made their way to the St Ives recreation centre to shoot the CAA Indoor Championships/Jolly Archers Open Indoor Tournament.

In all, three sessions of Portsmouths were shot. Kimberley Callaghan and Jack Atkinson shot the latter two, while Liam Pattinson, Sam Kitson-Platt and Robert Spencer shot the first one. With the roof rattling above, our barebows (Liam and Kimberley) outdid themselves winning the barebow team by a convincing 52 points over Fenland. Liam won his category in the CAA champs and placed second in the Jolly rankings. Kimberley won women's barebow for both, and also topped the double Portsmouth charts.

A shout out is also due to Jack Atkinson, who shot for the City Bowmen and helped their compound team to the top of the CAA rankings. Unfortunately our recurve team of Robert and Sam was unranked due to lack of a third member.

In all it was a good day indoors, away from the wind and the rain. We brought home some shiny medals in the barebow category and all had a great time. We are looking forward to next year. 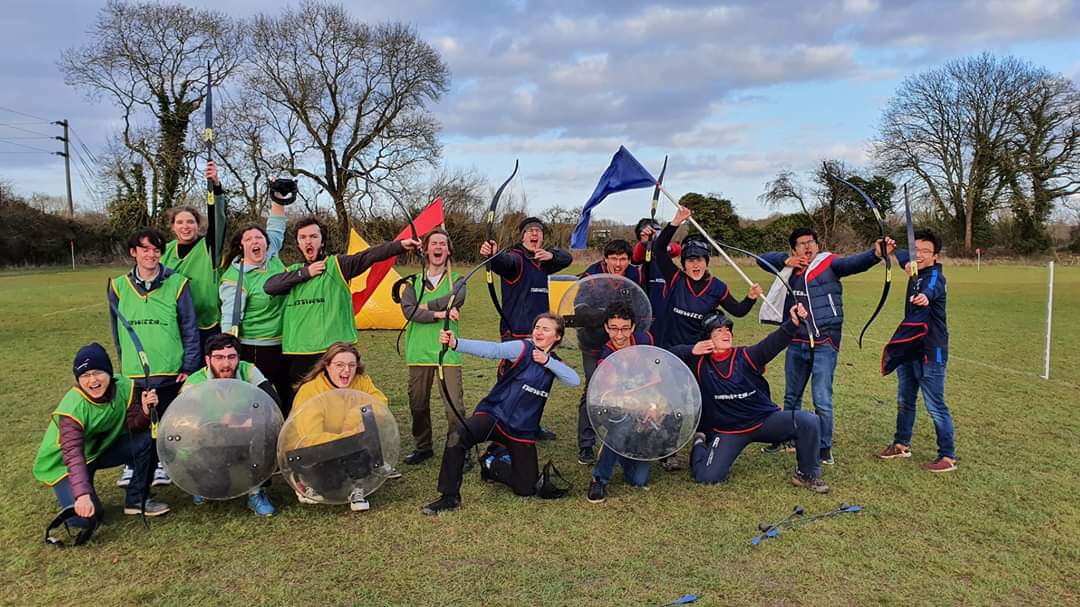 On the 8th Feb, eight CUB archers headed down to Oxford, unfazed by the impending Storm Ciara, to take part in the 2020 Grudge Match against the Oxford University Company of Archers.

The late morning was given over to a Frostbite round, which for the Cambridge novices was the first experience of shooting outdoors, followed by a couple of hours of intense archery tag played with 18# bows and rubber tipped LARP arrows. Particular highlights of the Frostbite round were Robert gleefully showing the novices the art of fake clicker noises and Andrew's sight-marker almost being sabotaged by Oxford's fluffy mascot Finn.

During the afternoon game of archery tag, the red mist descended for some of us (*cough* Vicki *cough*) and despite taking several rounds to get the hang of it, we almost drew level with the larger and more practised Oxford team for the four-against-four rounds. Special mention goes to Davey's delightfully delicate footwork during the capture-the-flag.

Afterwards, the Oxford team treated us to BBQ food, further varsity-related banter, and the results. Sadly, despite the sky being sunny and very much light blue, the scores were not, with the experienced and novice teams both gracefully conceding defeat. However, we returned to Cambridge with both excited plans for a CUB paintballing outing and a great deal of knowledge about how to properly psych out the Oxford company on home turf for the 2021 Grudge Match.