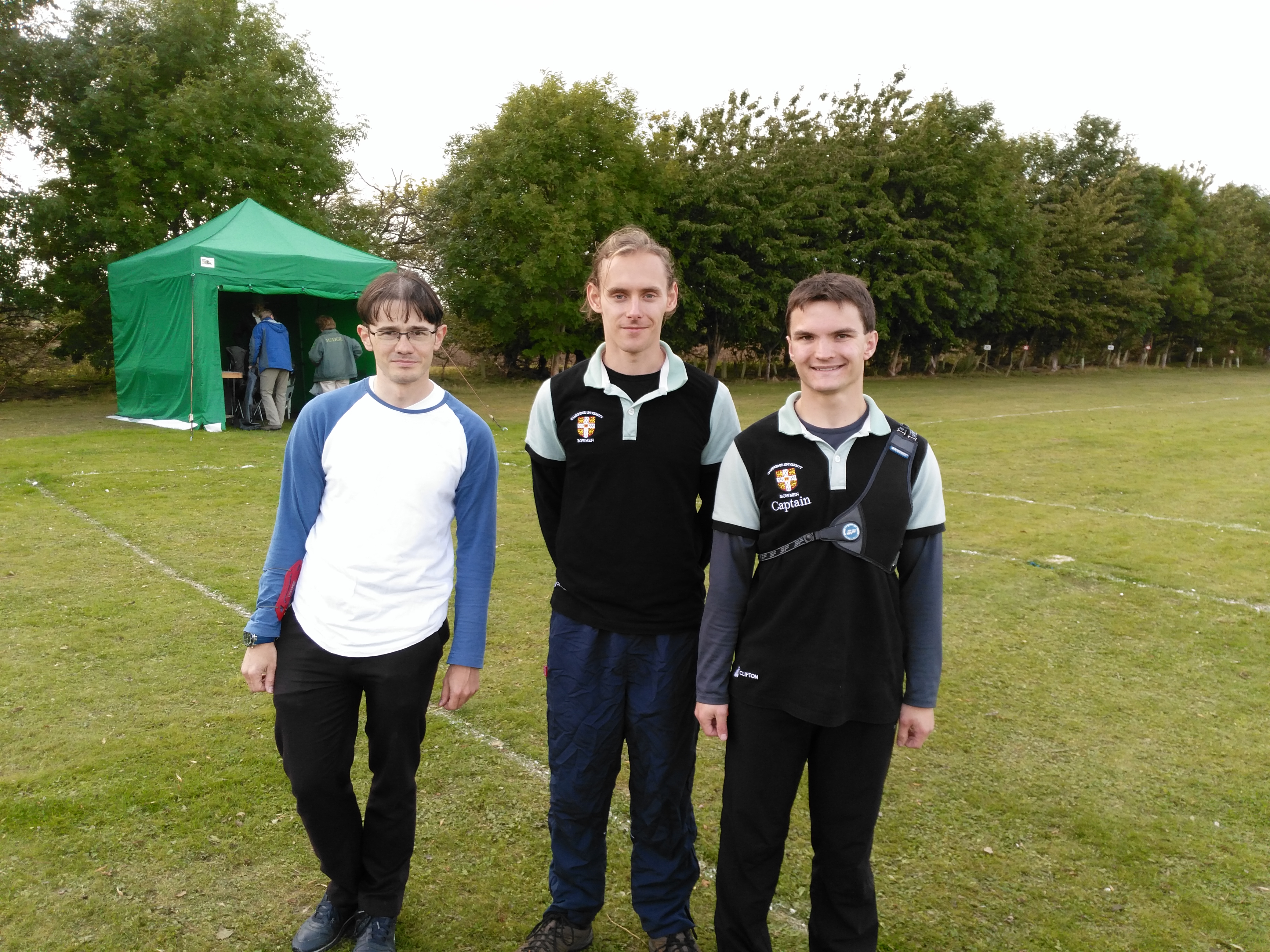 Our archers were out and about again this weekend as the outdoor season draws to a close. Members Jack Atkinson and Liam Pattinson, and alumnus Stuart Fraser attended the Jolly Archers' York/Hereford on Sunday. They could immediately tell they were coming in to frostbite season upon arrival, and it was so misty they could only just make out the targets at 100 yards. The shoot had it all though; mist, sun, rain, a wild kite circling above... (admittedly no snow, so maybe not quite all). There were PBs for both Jack and Liam, and congratulations to Liam who came away with a silver medal for Gent's Barebow in the York after a hard fought battle for gold. This marks the end of the outdoor season for us (apart from the CAA end of season shoot in a fortnight) as we prepare to welcome our new new members and beginners in October.

29-12-2016
This term there have been two BUTTS legs - CUB started off the season in Oxford on 12/11, followed by Trent on 26/11. There have been some strong performances so far, in particular from the Novice team who were narrowly beaten to first place in the first leg (only 10 points behind serial winners Birmingham) and are currently in second place in the aggregate points scores, only 2 points behind the leaders - let's hope they can keep it up in the new year! The seniors are holding steady in 6th place, ahead of Derby and Oxford - hopefully this bodes well for Varsity later in the year, but of course a lot can change. Individually there have been a number of success and medals across the two legs, including a lady recurve silver, two barebow golds, a novice gent silver and two novice gent bronzes. Liam Pattinson also managed to set a new barebow club record on the Portsmouth round. Full results for the season can be found on the BUTTS website here.

Looking towards to next term, it's going to be a busy one, with two further BUTTS legs and the BUTTS Championships and ball, BUTTS team champs and BUTC, not to mention a new, supposedly improved BUCS format which will see the team headed to the Southern regional qualifier in Crawley in February before any qualified archers go on to the finals in Bristol in March.

Also happening next term, the social event of the year: CUB Annual Dinner! Places are filling up fast - as of writing this, there are only five spaces left, so if you want to go but still haven't notified Vamsee (social sec), please do so ASAP.

Closer to home this term we have completed our annual beginners' course introducing over 70 new people to the sport of archery. This year has been rather sucessful with over 40 new beginners joining the club. We look forward to seeing you shooting with us next term. A big thank you to everyone who volunteered their time to help out with this important piece of the club.

The final event befoer the holidays was our Christmas shoot. We all enjoyed shooting at a variety of different targets from ballons to field faces to stockings, rounded off by CUB's "Nerves of Cardboard"; a more arrow safe version of the famous Nerves of Steel! A great time was had by all, and thanks to everyone who brought along snacks.

02-07-2016
During the summer we held our first alumni event in recent memory. Thanks to Heather for organising and all who attended; we had a lovely afternoon shooting with a meal in the evening. Hopefully it won't be so long until the next one.

If you couldn't make it but want to stay in the loop for future events, please get in contact with the alumni liaison officer. 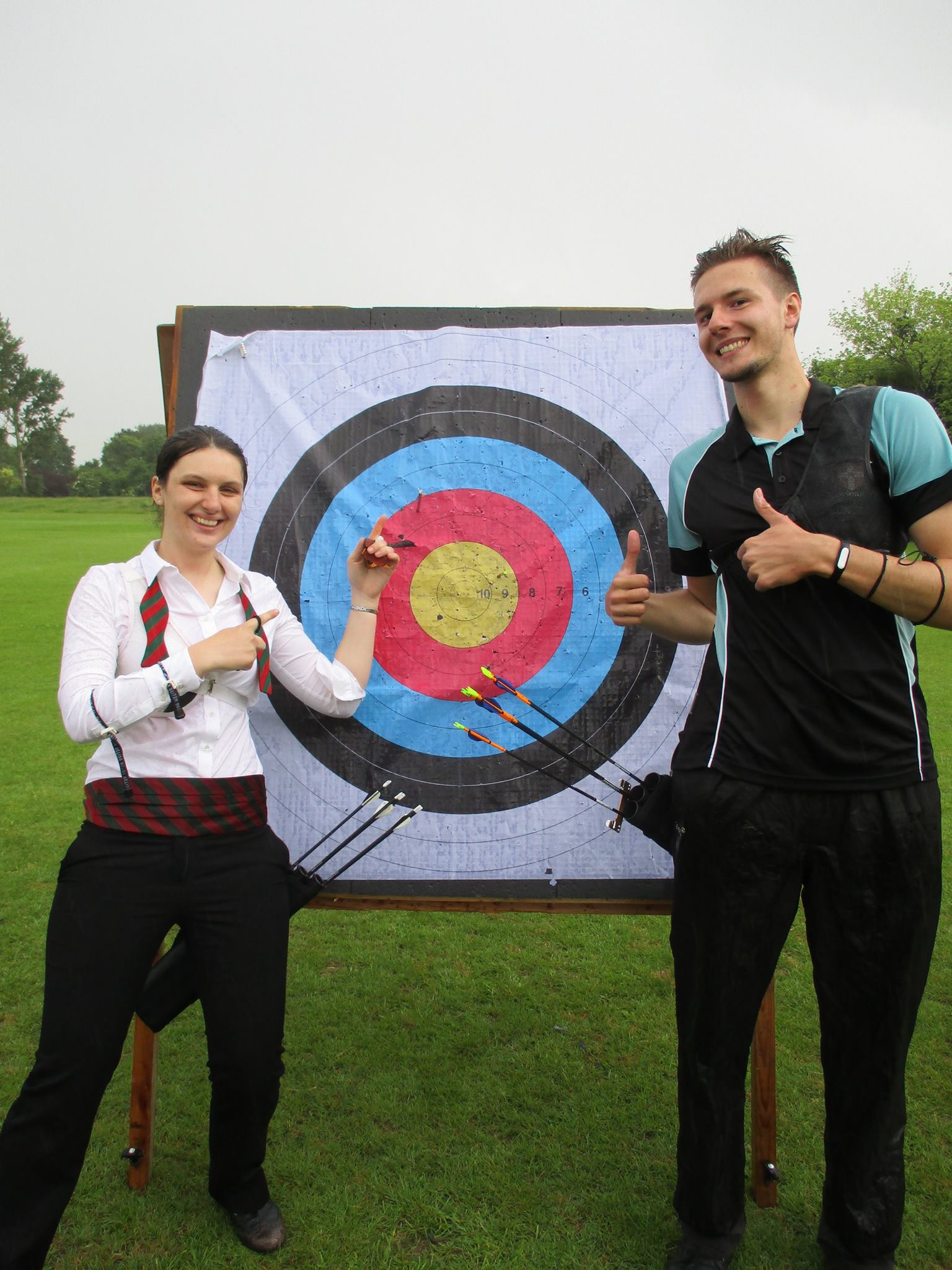 Cuppers 2015 took place on a very wet afternoon in May Week. Two ends in to an already wet qualification round and it began to pour.

Kings', Clare, and Girton fielded teams this year, and a tactical decision was made by the captain to award the trophy based on a 2 arrow head-to-head before packing up, drying off and heading for something to eat!

Kings' came in third, with underdogs Girton taking the trophy from defending champions Clare. Congratulations to Isobel and Aidas.