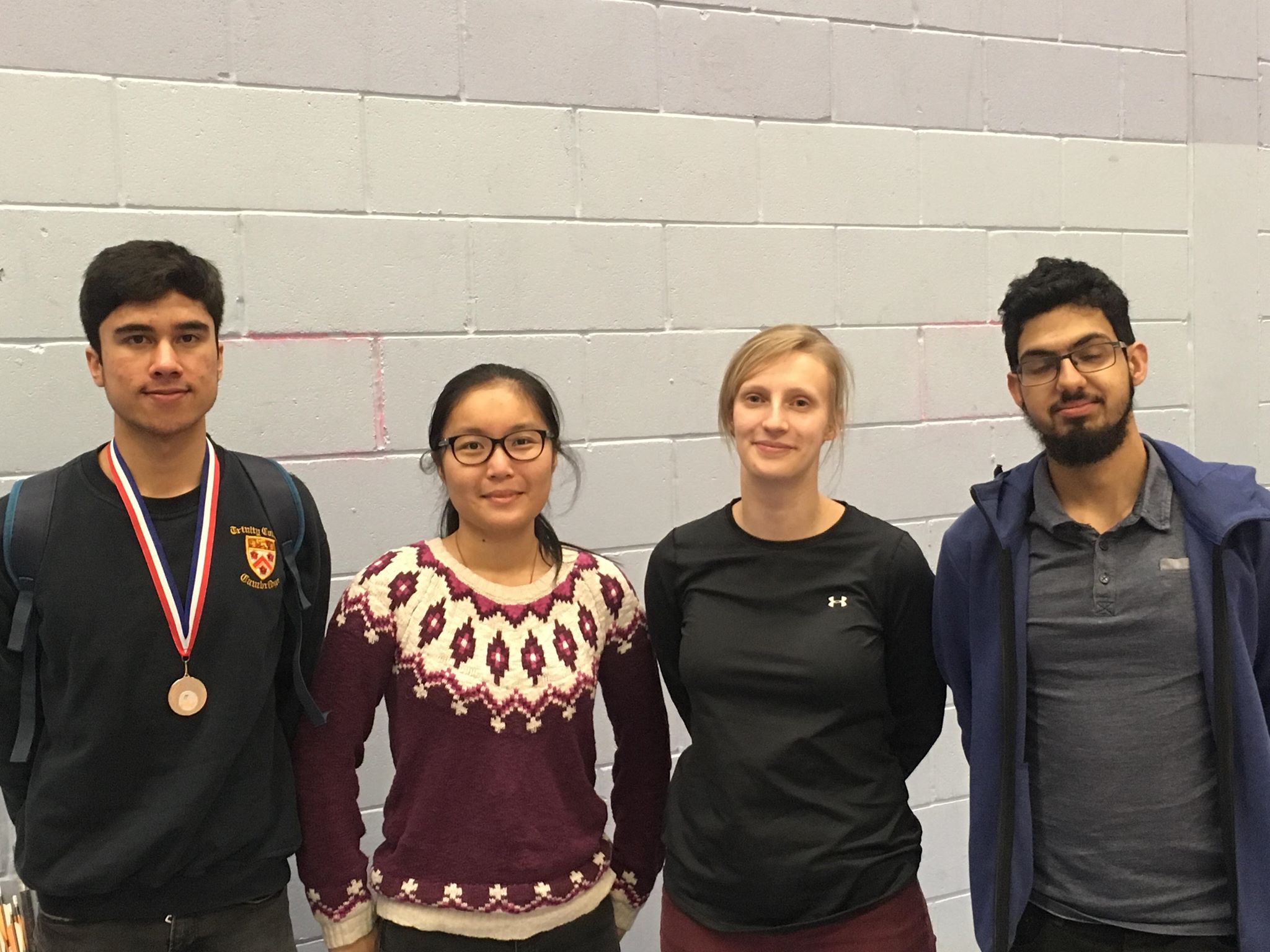 Rain and a potentially optimistic meet-up time began the morning of December 1st where four CUB novices were chaperoned by Fraser to the Warwick Open Novice Tournament. Smooth driving and flawless GPS navigation marked the first success of the day and the team made it to Warwick with plenty of time to spare. A large contingent from Nottingham joined Cambridge, as well as archers from Birmingham, Warwick and some open entries. Luckily, many of these were familiar faces and there was a relaxed atmosphere at this competition. All archers achieved great scores with Demelza Wright narrowly missing a medal position and Thomas Burridge giving an excellent performance to achieve a silver medal in the gent's recurve. The competition ran slightly differently than the novices had seen before, whereby the details did not switch shooting order, and the second detail joined the line as soon as there was space on their target. Despite temporary confusion amongst all archers and chaperones, the Cambridge archers passed this test of mental agility with flying colours.

Without team scoring, there was a very non-competitive atmosphere and all archers enjoyed socialising with other novices behind the line. In particular it was nice to see a few who had not yet joined a competition find their feet. We hope to see them in future! Thanks should be given to Warwick for providing this atmosphere in a very well organised and inclusive competition. 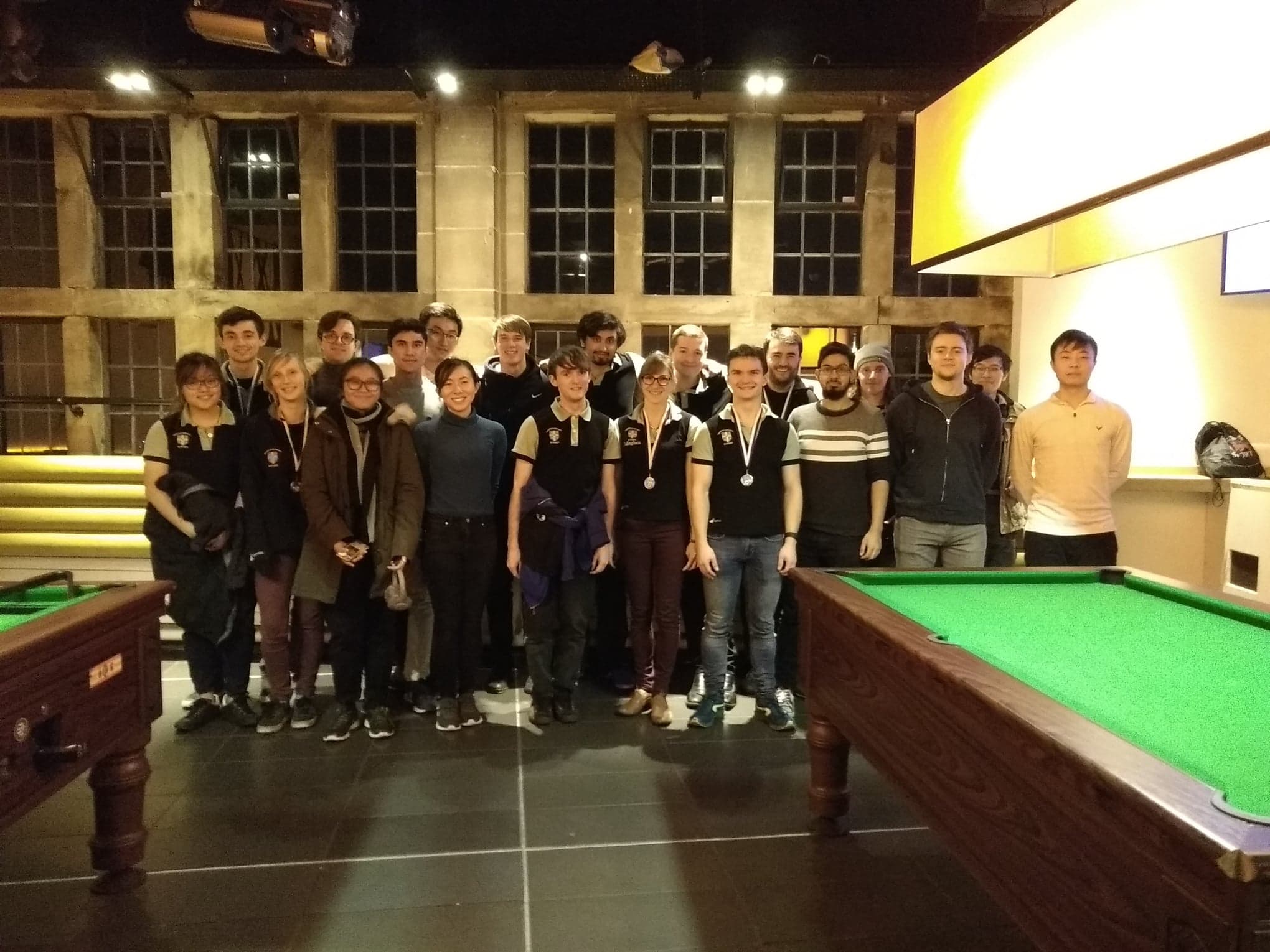 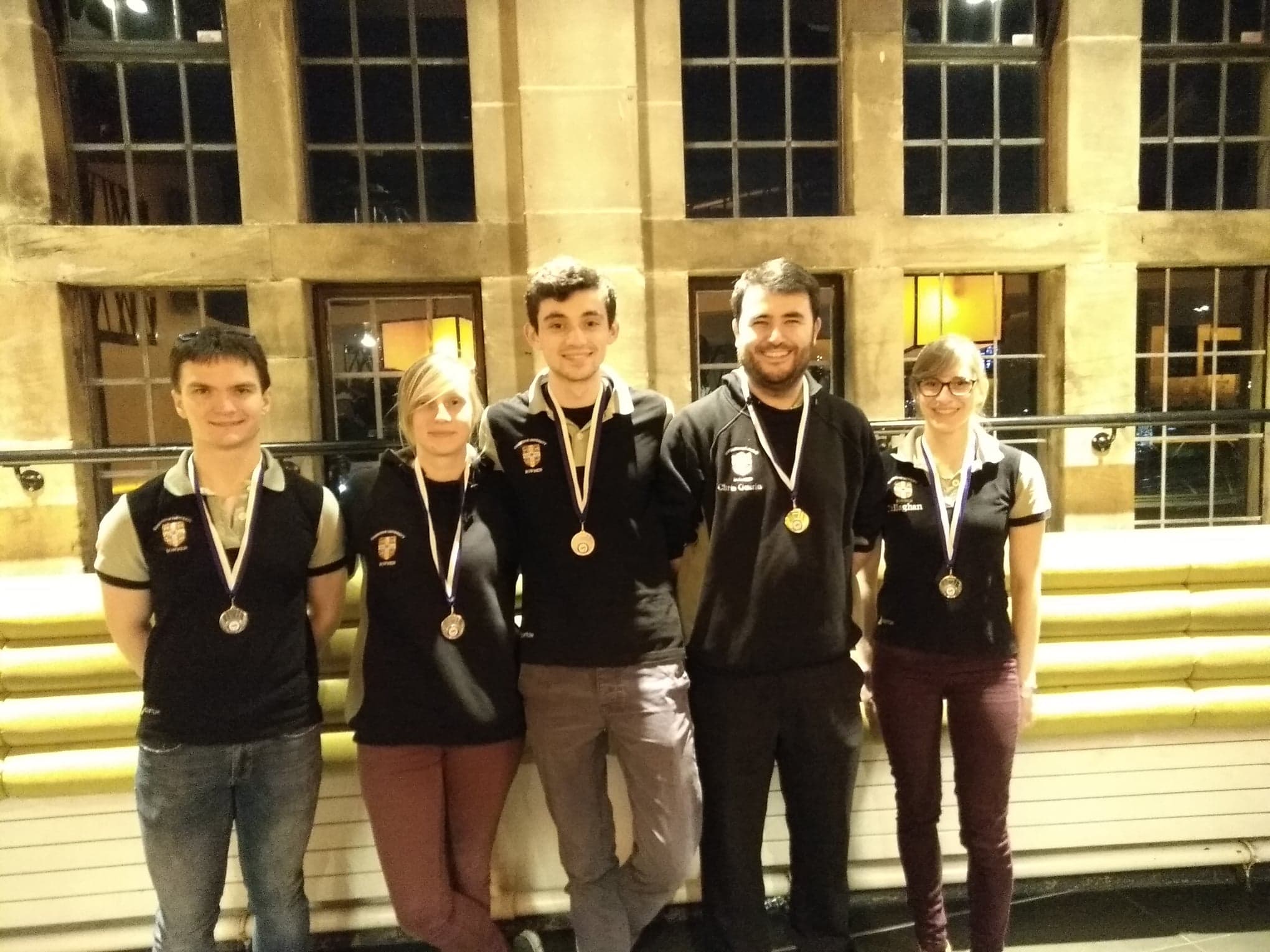 On the 25th of November CUB sent 20 archers to Birmingham for the second BUTTS leg of the year. Competing against Birmingham, Loughborough, and Nottingham Trent, we came home with 5 medals: Christopher Guerin and Jack Atkinson won the gold and silver medals respectively in the compound category; Kimberley Callaghan won the silver medal in the barebow category, with Fraser Waters winning the bronze medal; and Demelza Wright won the silver medal in novice ladies recurve.

The novices in particular scored very highly, finishing the day with a total of 1926, second only to Birmingham among the novice teams, and more than 250 points above Nottingham Trent, the third place contenders.

The competition was overall enjoyed, despite the usual mixed emotions and ups-and-downs of shooting, as well as a distinct lack of space in which to stand behind the safety line, amongst everyone's equipment. After results were announced almost all of us from CUB remained for the social and some excellent food.

We look onwards and upwards eagerly with Cambridge's own BUTTS leg to follow soon, when it kicks off the next term's indoor shooting!

Six of our archers participated in the BUTTS non-recurve champs on the 17th of November. Archers can shoot in either of three categories: compound, barebow and longbow. Unlike normal BUTTS legs, the event consists of a Portsmouth (seeding) round followed by head to heads, of which the latter's less predictable nature adds to the thrill of the competition.

The day ended with a "handful" of medals. Jack Atkinson and Kimberley Callaghan clinched the gold medal for the compound and barebow Portsmouth round respectively, while Andrew Browne and Cassandra Lim obtained the bronze medal for the longbow category. On to the head to heads, Liam Pattinson (barebow) and Jack won the silver medal with Kimberley and Cass getting the bronze following a few misplaced shots. The combined team score consisting of a longbow, barebow and compound managed to place us in third place, narrowly missing out in silver to Warwick by a few dozen points.

Following the results, we headed to the Warwick union bar for drinks and and some killer burgers before hitting the road. The non-recurve champs was a nice change of pace, and allowed our non recurve archers a day in the limelight. It's a great place to try out that alternative bowstyle you have been secretly practising in a bid to master all bows. 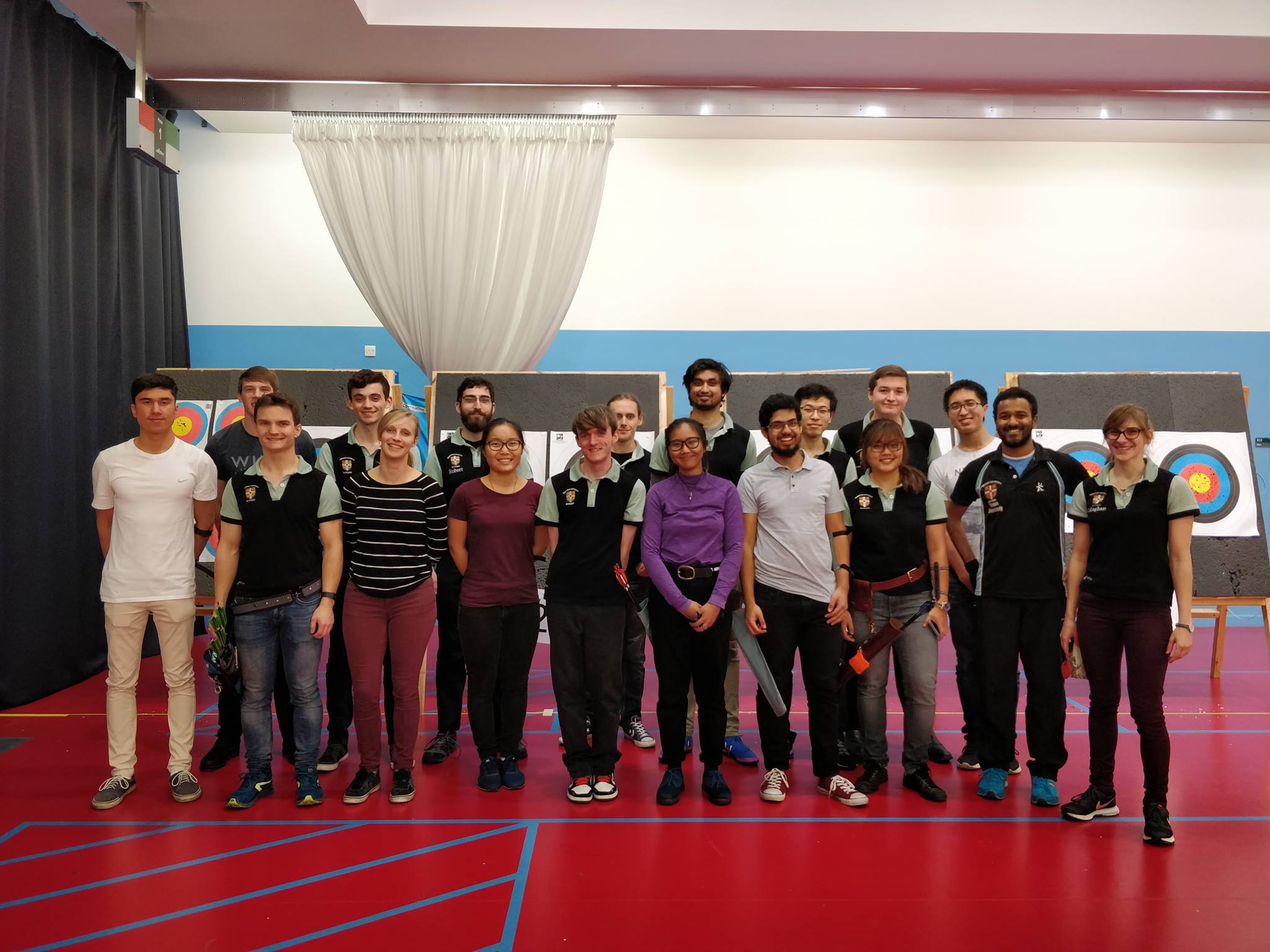 The 10th of November marked the start of the regional BUTTS league. 18 of our archers travelled to Nottingham, pairing up with Oxford University to shoot a Portsmouth round in the second half of the day. Having reached in good time, we took the opportunity to explore the sports complex and have lunch at the cafe, keeping us all in solid mental form for the competition (a fantastic excuse to snack on biscuits to our hearts' content.)

The competition itself was a lovely day out. This was the novice team's first ever archery competition, and for a lot of us, our very first sports competition (unless of course you count the primary and secondary school sports days!). Emotions were mixed during the previous night's training session as uncertainty about what to expect crept in, but during the day spirits were high and good times were had. The atmosphere was an incredibly friendly one and made it much easier to keep a very positive attitude throughout the competition, despite any ups and downs whilst shooting.

After the results were announced, a few of us stayed behind to participate in the true test of skill that is the boat race and for dinner with the other teams. It was really nice having such a relaxed environment with everyone putting aside the competition and having a great time. The dinner was a great way to meet archers at other clubs and was the cherry on top of what had been a fab day. I'm absolutely looking forward to the next competition! 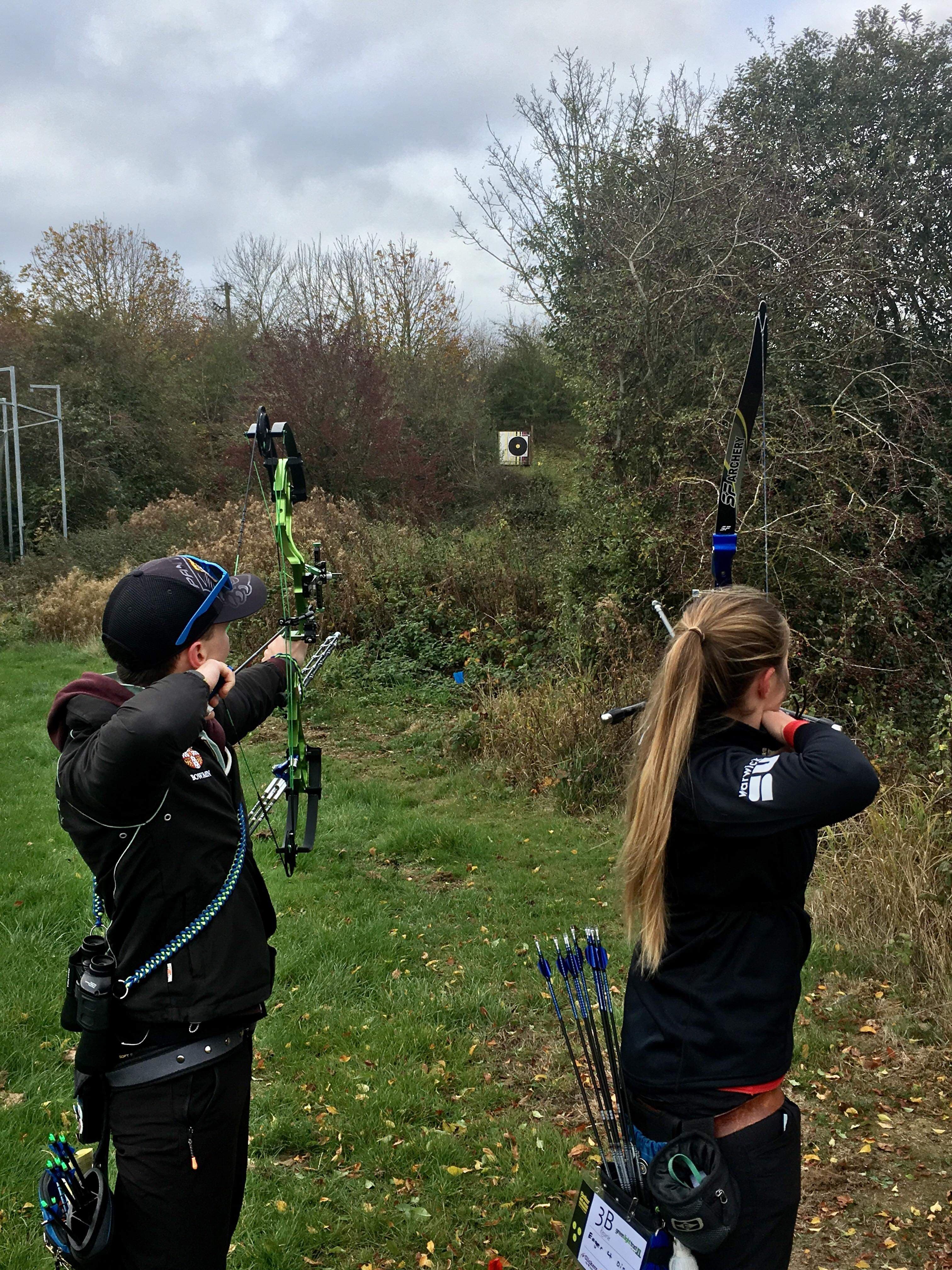 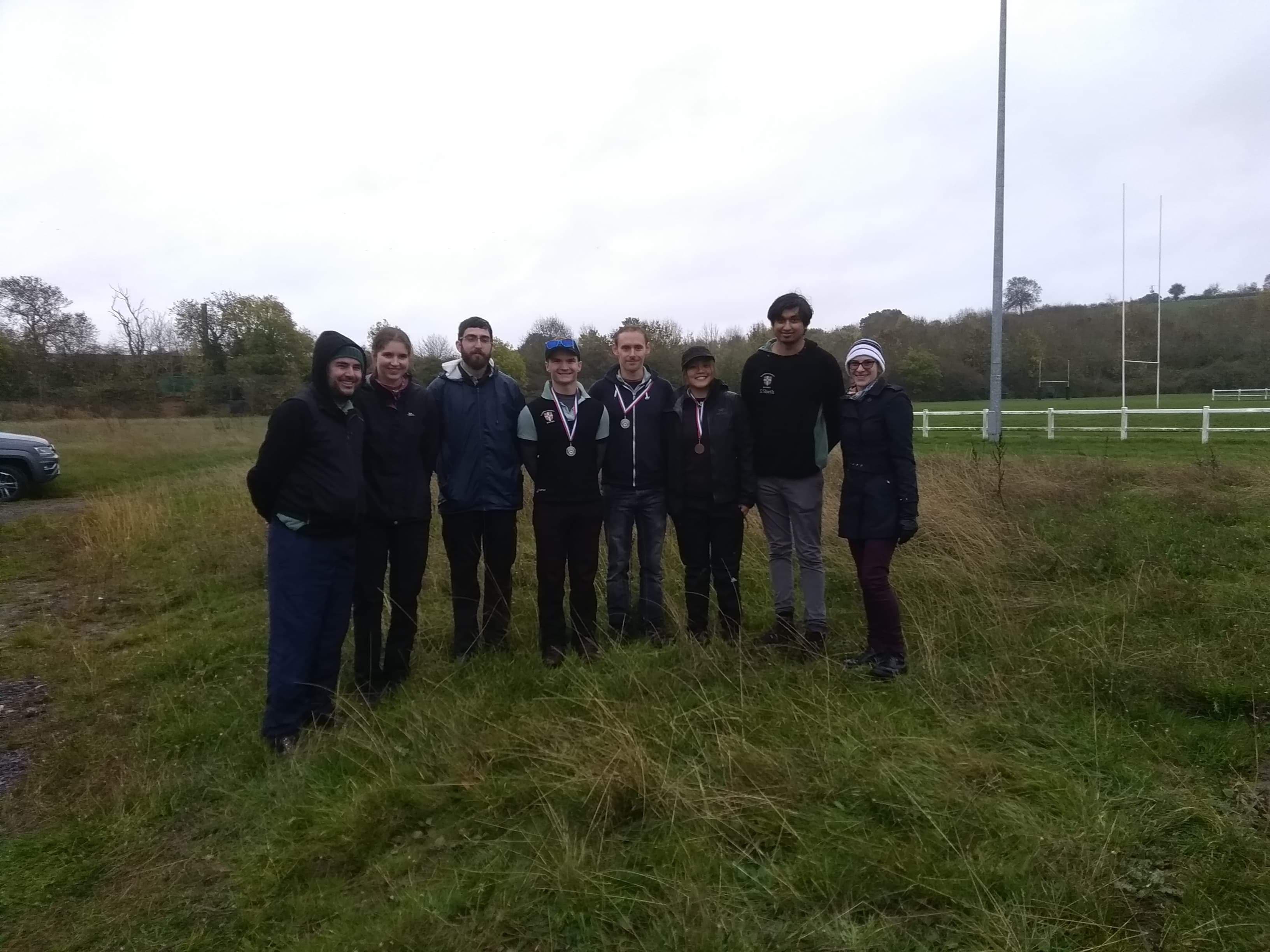 On Saturday the 27th of October nine of our archers attended the BUTTS Field Championships. This was the first student archery competition of the new academic year before we begin the regular BUTTS and BUCS legs of the indoor season. Field archery, often referred to as 'archery golf' sees archers walking round a course, usually in woodlands, shooting at a variety of targets of different sizes at varying angles and at distances up to 60m away. This event was a mixed round where archers shoot 12 targets in the morning not knowing what the distance is and relying on their own skills and intuition, followed by 12 targets in the afternoon where the distances are known.

A bright but cold start, with frost on the ground, turned quickly to cloud and drizzle by lunch, and then in to rain and briefly snow for the rest of the afternoon with temperatures reaching a high of 4 degrees celsius. Our archers persisted with the course nonetheless, eventually coming home with some glory. Cassandra Lim took gold in ladies' recurve in her first competition for CUB whilst Jack and Liam narrowly missed out to come away with silver in the compound and barebow categories respectively. Together these three made up the Cambridge team which came second, missing out on the BUTTS Field shield to Warwick. Jack and Cass also set new club and county records for their categories. We hope to keep this success up as we head in to the busy indoor competition season.

It was an enjoyable experience making new friends, with many hoping to do more field archery later in the year, perhaps in warmer and drier conditions. Congratulations to all of our members who took part and thanks to Long Buckby Archery Club for hosting us. Special mention should also be given to our members from warmer climes who persevered through the tough day with minimal complaints. Full results can be found here.