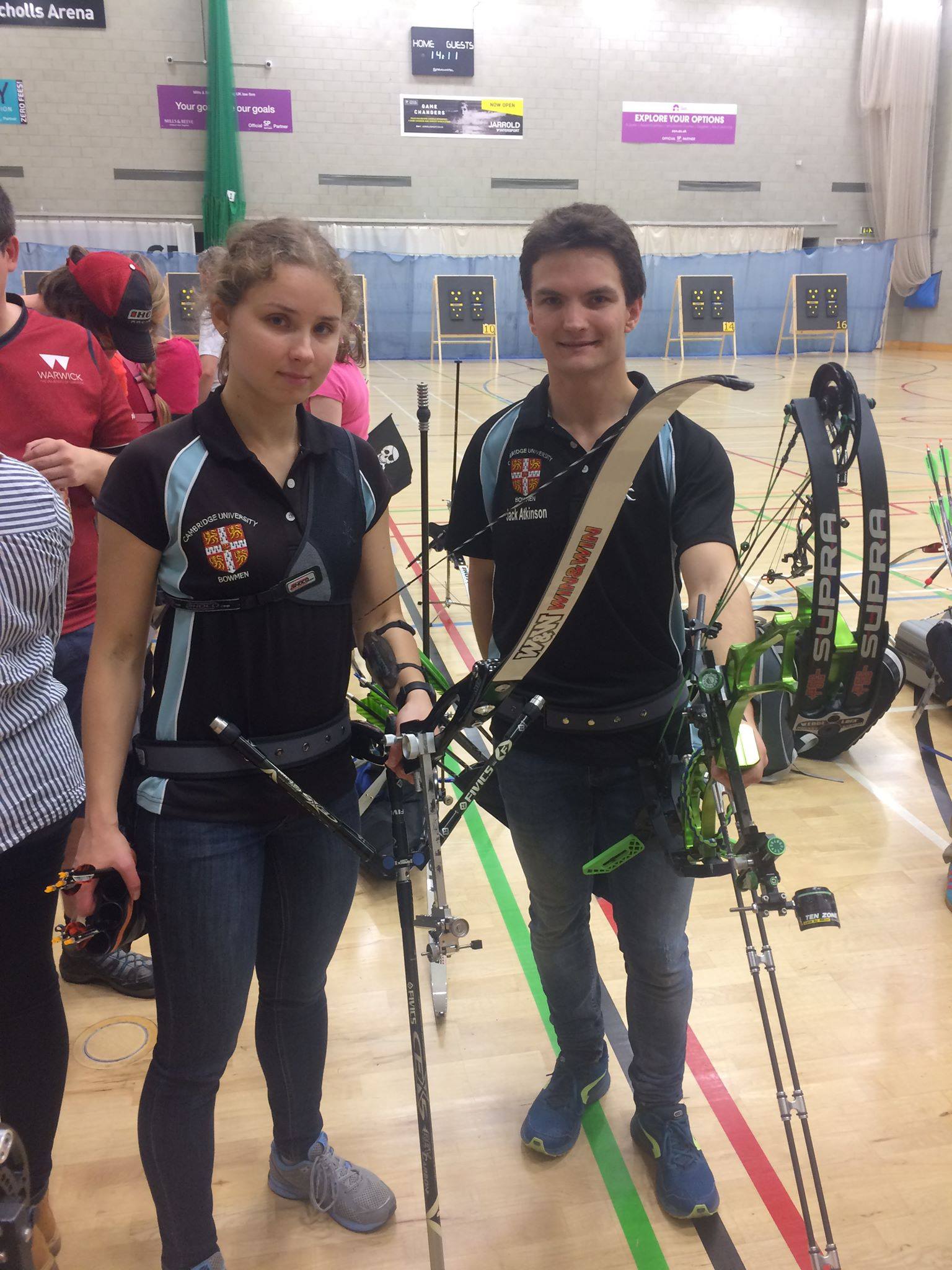 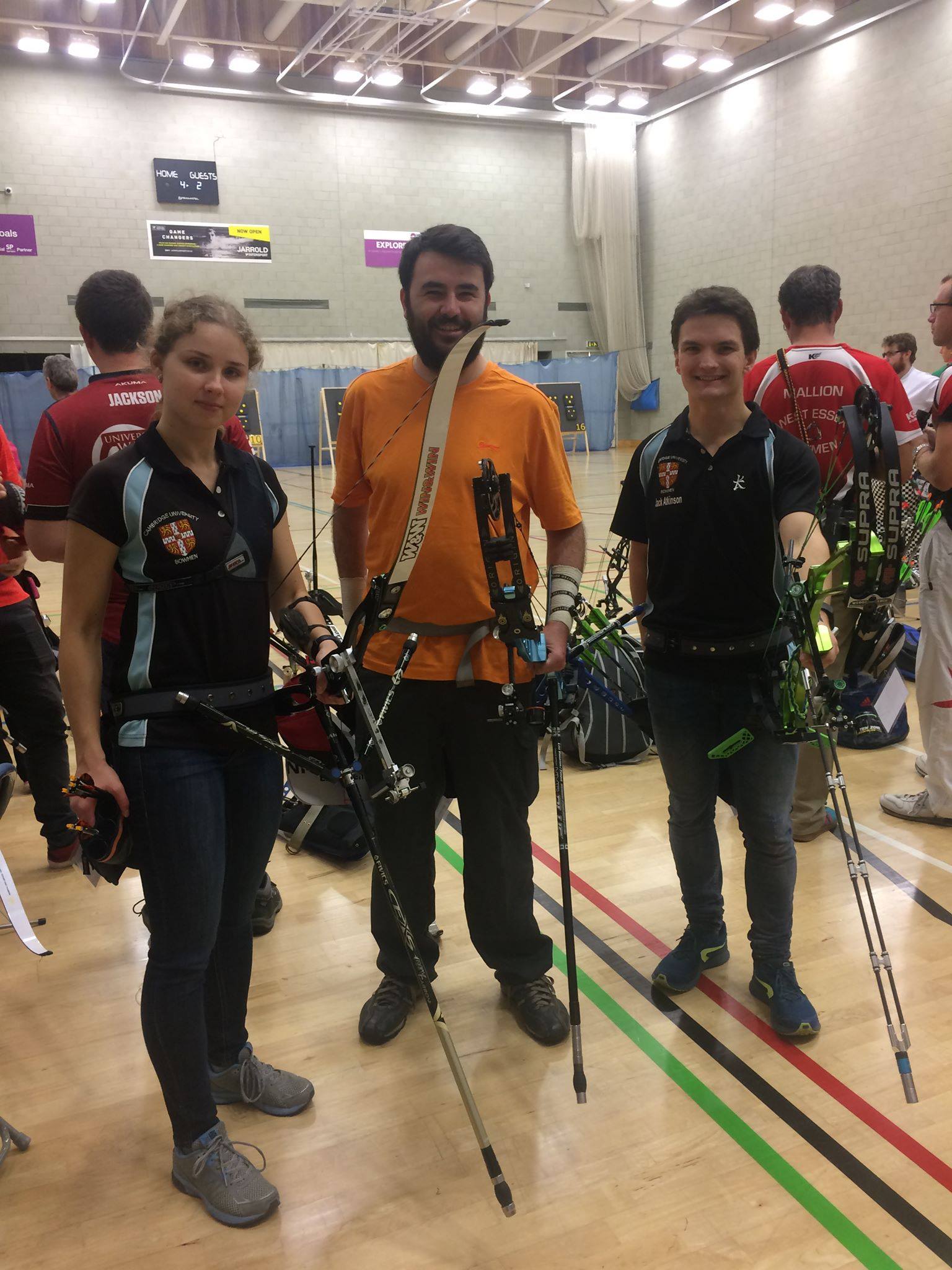 Three of our archers attended the Beiter Hit and Miss competition on Sunday the 14th of October getting an early start to the indoor competition schedule. The tournament sees teams of 2 (one compound, one recurve) shooting at small yellow discs (60mm and 40mm respectively) at a distance of 18m - very similar to BUTC. A 60 arrow ranking round (with no sighters!!) was followed by head to heads of 12 arrows. Rocking the vintage stash, the CUB team "Archers of Discworld" (Beiter/disc related puns in team names obligatory) comprised of alumna Maryia Karpiyevich on recurve, and Jack Atkinson on compound. A solid ranking round with 36 hits placed them 16/64 - a pleasing result with stiff competition, and the highest of the university teams [citation needed]. Slow to get going after lunch they tied their first match leading to a high pressure one-arrow-shootoff. Success was never in doubt however with Jack taking to the line and nailing the disc with perhaps his best shot of the day. Having successfully made the top flight they now faced the 17th seeds, and despite Maryia opening with a fantastic 3 out of 3 hits, it was not to be and they were sadly "nocked" out. The third member of CUB in attendance was Chris Guerin as the Dutch half of team "Brady Ellison and Mike Schloesser". Not quite living up to his nickname today they still put in a respectable 34 in qualifiers to place joint 18th, and successfully made it through their first match to the top flight before also being taken out. A fun day was had by all. A nice opportunity to catch up with friends, prepare for the indoor season, and try something a little different and unusual in the sport of archery. Results can be found here. 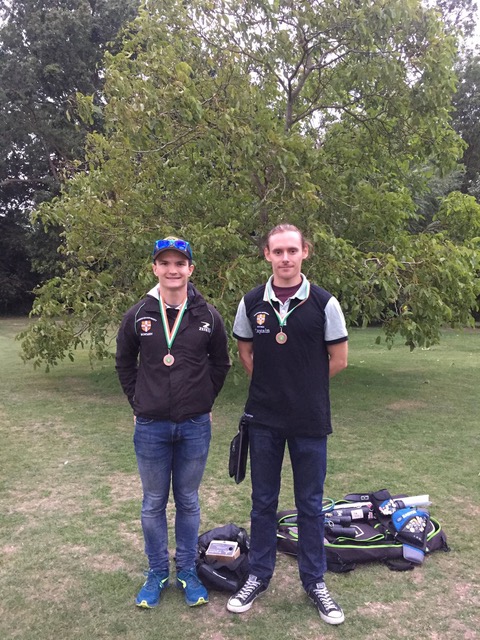 As the outdoor season draws to a close our archers had one last competition in their schedule. On Sunday the 16th of September Jack and Liam shot at the Autumn York and Hereford Rounds hosted by Jolly Archers in Huntingdon. Though there was (almost) no rain it was a very breezy day making it challenging to both aim, and also to hit where you aimed - especially at 100 yards!

Despite this both archers shot well to take bronze medals in their categories (Gent's Compound for Jack, and Gent's Barebow for Liam) with Jack setting a new club record, but just missing out on a 1200 Rose. Full results are available on the Jolly Archers' website. We now move our equipment this weekend ready for the start of a new academic year and the indoor season. 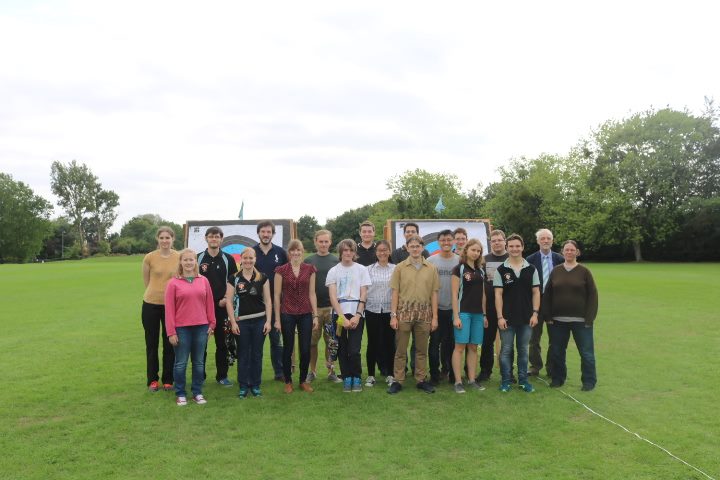 On Saturday 18th August 2018, the annual Alumni Event was held. With overcast clouds looming and some rays of sunshine seeping through, 9 alumni members and 6 students took to the fields of Churchill College to compete in the alumni vs student shoot with a National round. The alumni members were composed of seasoned archers and those who had not touched a bow in years, while the students were shooting a range of bow styles, from longbow to compound.

After many arrows were shot (mostly) towards the targets, an abundance of snacks and plentiful socialising and reminiscing, the alumni team proved they still had what it takes to win, beating the student team by a whopping 706 points!

The day continued on with drinks and chats at St. John's College Bar, where we were graced by the presence of the club accounts dating back to 1962 brought there by our Senior Treasurer (and alumni) Professor Lindsay Greer. After pouring over the books and seeing the club grow over the years, we headed to Browns Cambridge for a lovely meal, where more alumni joined us. As the evening came to an end, we parted ways looking forward to the next event. 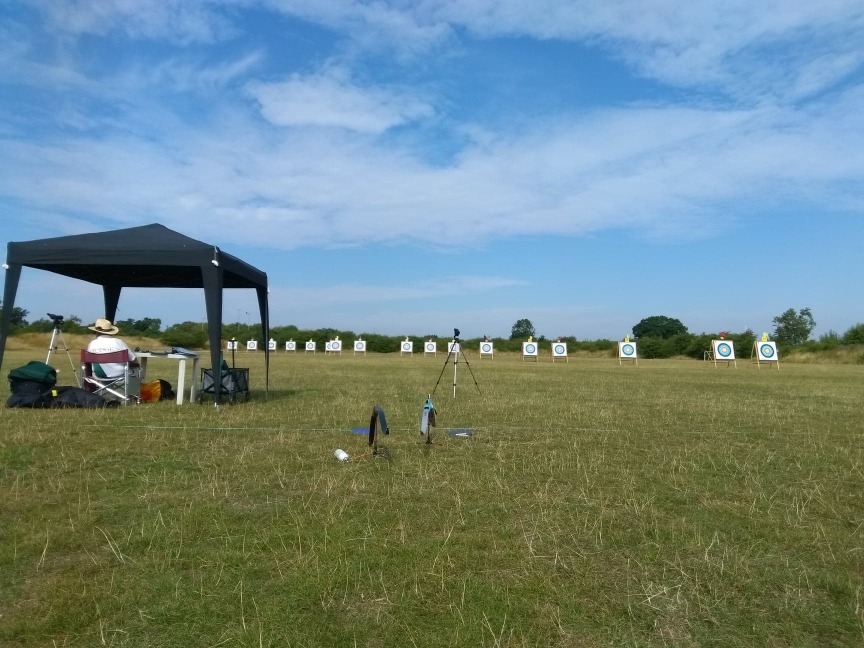 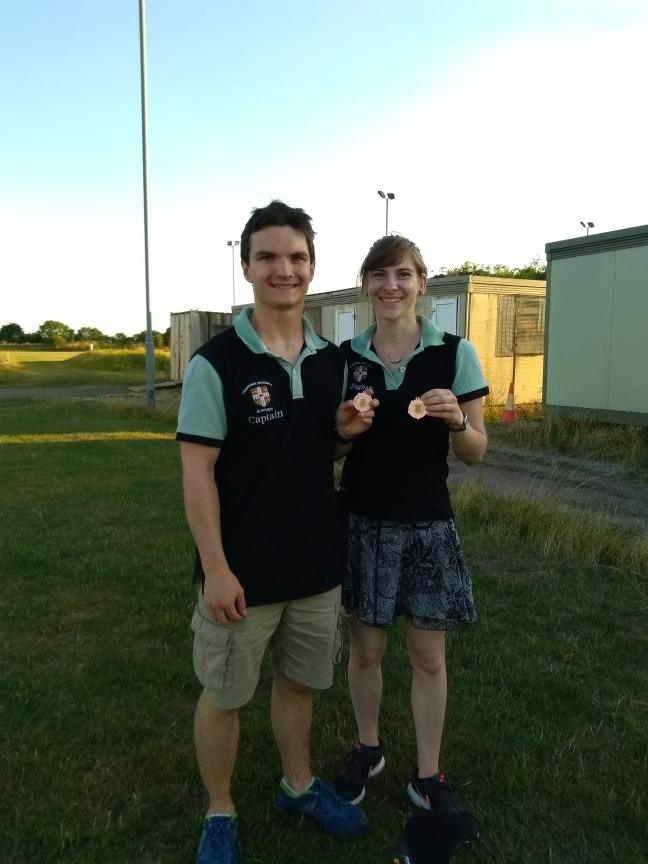 It may be the vacation period, but the outdoor season is still in full swing, and so are our archers. On 5th August members Jack Atkinson and Kimberley Callaghan attended the NCAS 3rd Caswell shoot, each shooting a WA1440. The weather was blisteringly hot, with the sun beating down constantly through the day forcing many archers into hiding behind tents in whatever shade they could find between ends. Combined with a haphazard wind at the targets, the conditions posed a challenge for all of the archers present.

Disaster nearly claimed Jack's shoot as a crucial screw fell from his bow, a thorough search complete with metal detectors, grass-pulling hunters and onlookers yielding nothing, but luckily a fellow competitor and true sportsman sourced a spare. Disaster averted the shooting continued, ending successfully for both Jack and Kimberley each claiming bronze medals in gent's compound and ladies' barebow respectively, a fantastic reward for a day's hard shooting! Both obtained English Cross awards, and Jack also claimed his Six-Gold-End badge. Many thanks to the Wellingborough Open Archery Club for running a great shoot. 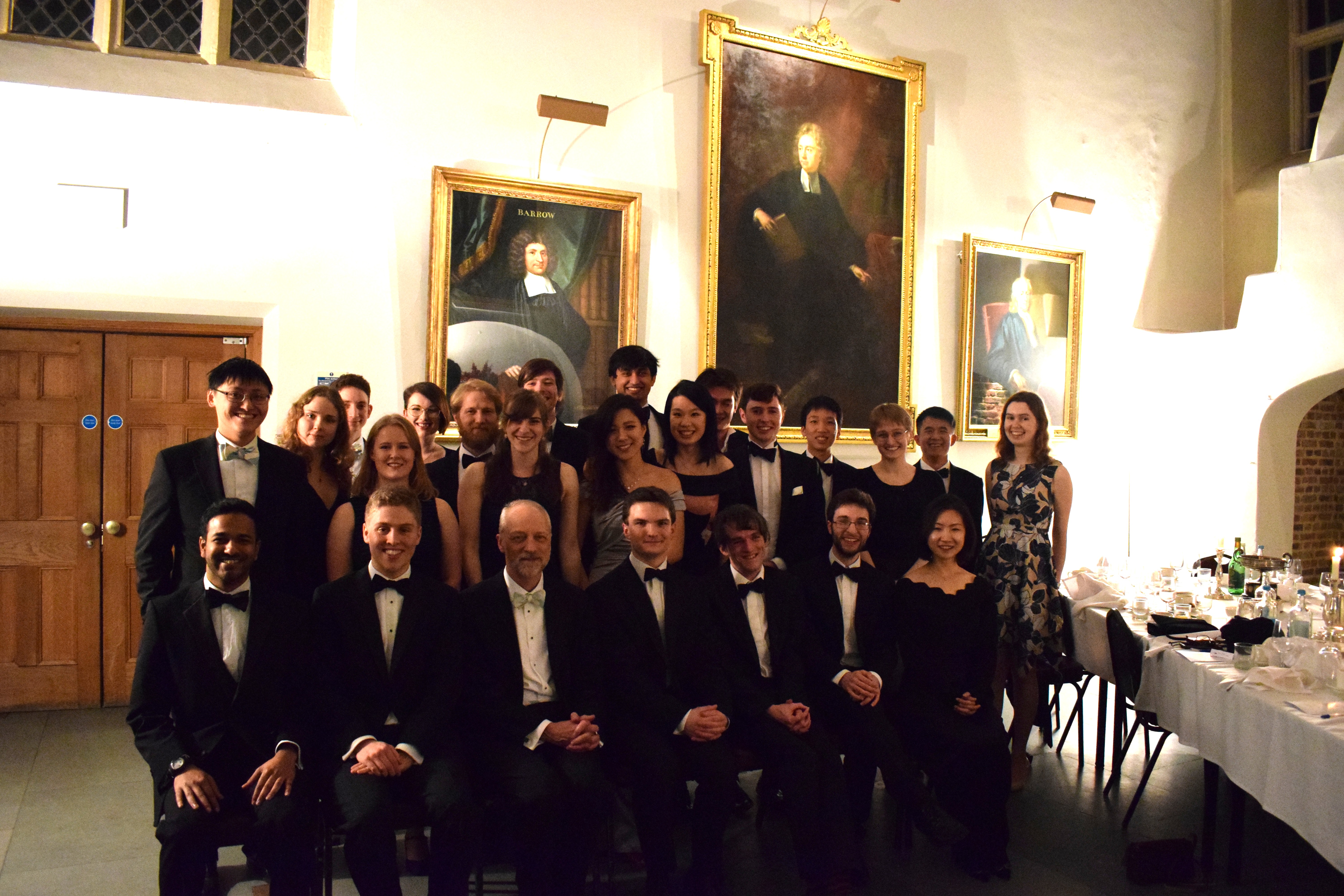 On Saturday 3rd February we held the long-awaited black-tie CUB Annual Dinner at Trinity College. This was well-attended by a contingent of 26 archers including several alumni, one of whom, Professor Lindsay Greer is now our senior treasurer. The night began with all meeting at the Mitre pub on Bridge Street, before we made our way to the Old Kitchen at Trinity College. The table was amply decorated with a fine set of trophies, including the awe-inspiring Varsity Trophy, thankfully retrieved from the other place last year. Jack's legendary attention to detail included a seating plan which included customised place cards decorated with an arrow of matching fletching colours to the respective archer.

After the archers spent a suitable amount of time admiring the splendour of the table and its surroundings the meal commenced. This included Confit Guinea Fowl Terrine, or a Baked Pumpkin and Goats Cheese Tartlet accompanied by a marvellous Riddle Creek Reserve Chardonnay. For the main, Roasted Venison (Sam assured all it was an extremely valuable cut) or a Baked Globe Artichoke accompanied by a Hoopenburg 'Bush Vine' Pinotage. For desert, there was a delicious Apple, Blackberry and Cob Nut Crumble with extremely generous portions of vanilla custard that left all attendees very satisfied that they'd got their money's worth of food.

As coffee and truffles were served, Alex Guyon gave a Natsci's valiant attempt at poetry to continue the tradition of the Social Secretary's rhyming speech. This year's effort focused on the mishaps of various members of the club with Tak, Richard, Omar and Shivam all meriting a mention. This was followed by a rather more eloquent speech by the captain Jack who updated us all on the progress of club including many successes at competitions and an extremely healthy crop of beginners joining the club this year. After the traditional passing around of the menus and many kind messages (and a few less so!) in everyone's menu, Alex gave a short speech to thank Jack for his extremely hard work and dedication to the club over the course of the year. The party then proceeded to the JCR at Christ's College until the early hours of the morning, including many a game of pool and good use of the PS4.

I'd like to thank all of you who came and made it such a fun night, and to Jack and Ivana who helped with the organisation of the dinner itself.