A Storming Success at BUTTS Field 2019 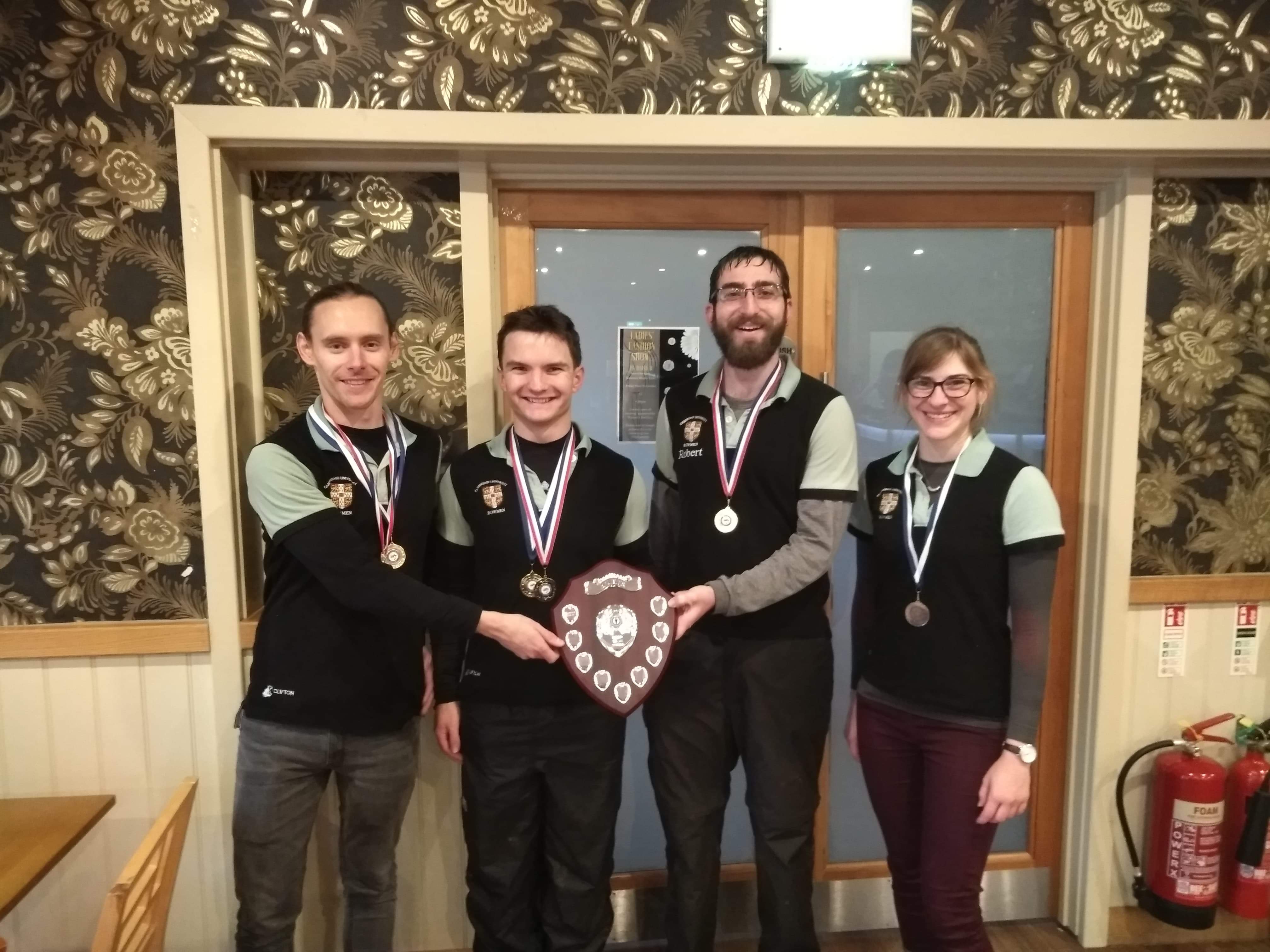 On Saturday 26th October, CUB sent 4 brave archers to the third annual BUTTS Field Championships at Daventry Rugby Club. In keeping with tradition, it was a day of rain, mud, and frigid temperatures. However, our archers were able to overcome this and put in a dominating performance, taking gold medals in gents compound (Jack Atkinson) and gents barebow (Liam Pattinson), a silver medal in ladies barebow (Kimberley Callaghan), and the overall team trophy!

The morning began with the unmarked course, in which archers are not told the distance to each target. The course was challenging as always, requiring shots at distances from just 5m all the way out to 50m. Some targets were the familiar case of shooting over flat ground, but other required archers to shoot up or down hillls, or over thick foliage and difficult terrain that made it hard to judge distances at a glance.

After a brief lunch break and a respite from the rain, our archers went on to the marked course. Although this sounds easier, as archers are told the distance to each target, the distances were increased from the morning, with some going all the way out to 60m. In addition, the temperature plummeted in the afternoon, while the rain continued relentlessly. Towards the end of the day it became clear that the conditions were wearing competitors down, with many shivering and complaining of numb fingers.

All of our archers were able to push through these challenges to put in excellent performances. Jack Atkinson devastated the compound competition by well over 100 points, while Liam Pattinson finished with more than a 70 point lead over second place. The battle was harder fought for our other competitors, with Kimberley Callaghan trailing just 5 points behind the gold medal winner and Robert Spencer missing the bronze in gents recurve by only 2 points! With these scores together, the team of Jack, Liam and Robert took the team gold medals and BUTTS Field trophy with a total of 765 points -- over 130 points more than the team in second place. And the icing on top: all four of our archers set new county records!

Trophies and a Master Bowman at Jolly's Autumn Shoot 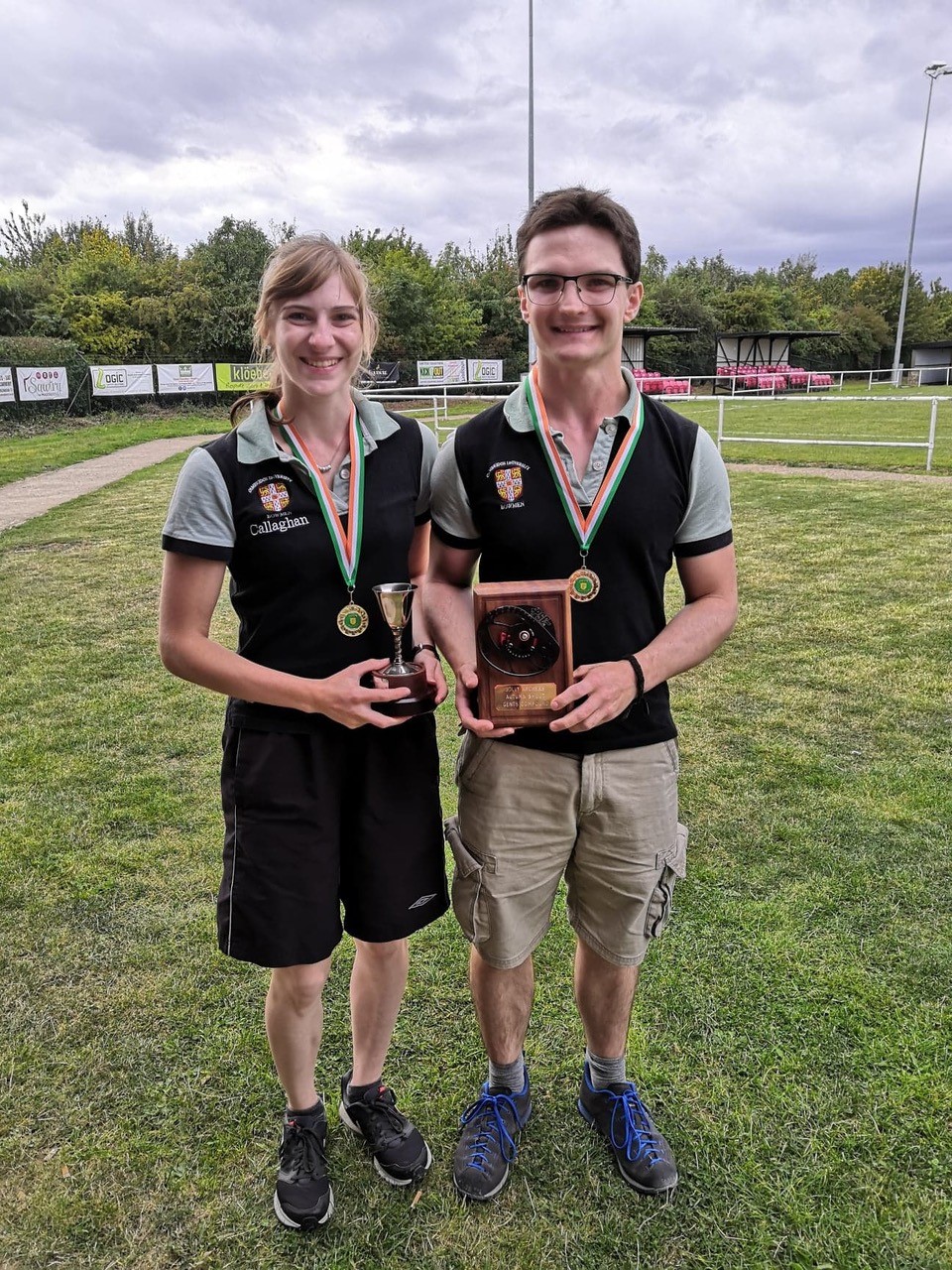 Unusually hot for mid-September, the temperatures were relentless with little breeze or shade to provide any reprieve. This made it a particularly draining day for all archers with plenty of fluids, suncream, and umbrellas needed. It certainly made a change to last year when 100 yards was barely visible through the mist!

Despite the heat there were strong performances from Kimberley and Jack, both beating friendly rivals to first place and claiming trophies for their efforts. Kimberley put in a storming performance in ladies' barebow to secure victory by nearly 300 points over second place!

It was a particularly good day for Jack as, in addition to a trophy and claiming his 1200 Rose, he also claimed his final Master Bowman score of the season (the third in just nine days!). This is a big achievement and the paperwork now needs to be sent off to ArcheryGB for ratification and a nice shiny badge.

Both archers are now gearing up to shoot for the county, alongside other CUB members, at the Cambridgeshire vs. Essex match next weekend.

Results of the shoot can be found online here: http://www.jollyarchers.org.uk/bin/page.php?extra=downloads 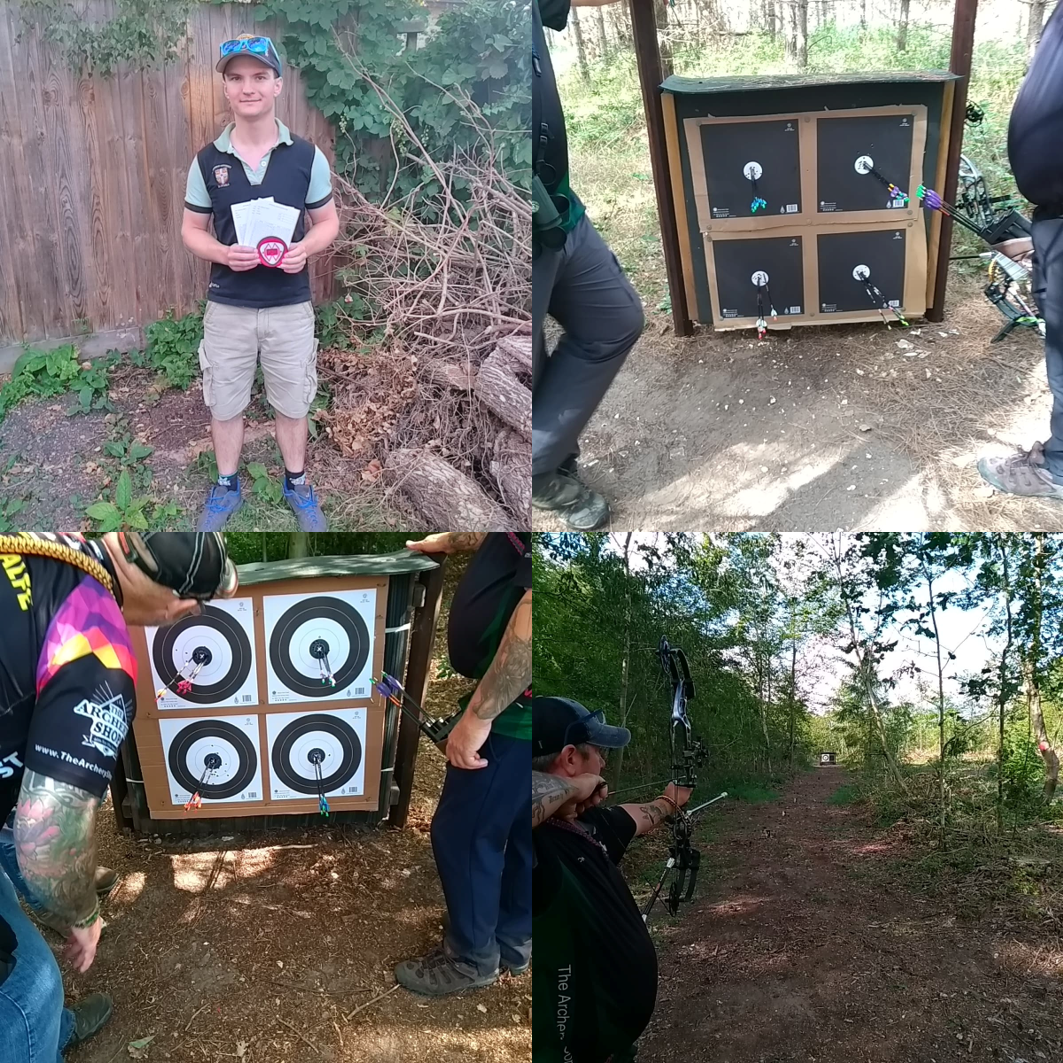 Beautiful scenery was complemented by lovely weather on both days, with the last gasps of summer resulting in the suncream being broken out - despite the Met Office updating their app to 'Autumn' over the weekend!

Saturday saw all archers shooting a Hunter round (white spots on a black face at a variety of distances) with Jack finishing an agonising 1 point off a Senior Field Master score. There was some reprieve, however, as he was able to finally claim his Grand Field Master classification which was awarded at the end of the weekend.

Waking up to do it all again on Sunday the archers moved to a different course, newly constructed this year, for a Field round. This took them in and out the woods with a number of challenging shots featuring inclines and heavily dappled lighting. A shake up in groups saw a more pressured day with less friendly target companions, but Jack improved upon the previous day to move a few places up the rankings and finish in 8th in the AMFU class. He also achieved his first Senior Field Master score.

Hopefully this gives some insight into alternative forms of archery and what members get up to off the sports field. If you are interested in finding out more about field please feel free to ask - it's great fun. 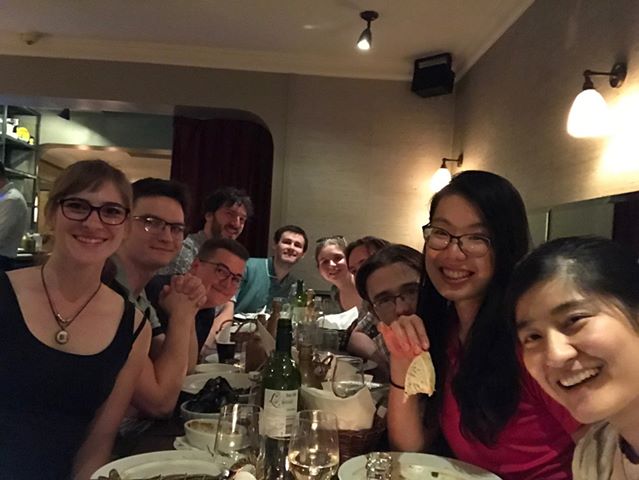 On a lovely sunny day, four alumni and three student archers gathered at Churchill field, and shot a national round. It was a relaxing shoot with many breaks, and an informal head-to-head to end the match. It was the alumni archers that proudly defeated the students. The shoot ended with ice cream and good chats - definitely the highlight of the afternoon.

After an intermission at Maypoles, in the evening, twelve of us gathered at the atmospheric Cote de Brasserie, and enjoyed a lovely meal together, with plenty of bread and wine. It was an educational experience hearing from the alumni archers how the club functioned in the past, and how they practised archery. All in all, the alumni shoot 2019 ended on a happy note.

On the 28th July, archers from CUB braved the elements (and the A14 roadworks) to attend the anniversary shoot at local club, the Jolly Archers. Despite the unseasonally bad weather, Cass, Sam and Robert heroically persevered through driving rain to shoot a full western, consisting of 4 dozen arrows each at 60 yards and 50 yards. Despite adverse conditions, the day was a success, with Cass taking bronze in the ladies recurve category, and the team scooped up the silver medal in the recurve team category. The total score of 1919 points meant that we comfortably beat local rivals, Cambridge City Bowmen, in our first encounter since the last western round at the annual Town v Gown match. After drying off in the clubhouse, we stayed for the raffle and results before heading back home. Overall an enjoyable but thoroughly soaking day!