On Saturday the 1st of February, Cambridge archers travelled the gruelling distance to the Elizabeth Way Rifle Range to spend a lovely day in the in its brutally cold Arctic environment (an archery staple).

Despite this misgiving, we managed to take home a total of six medals! Liam Pattinson won gold and Sean Seet (Mr. 500) also took gold, whilst Kimberly Callaghan, Vicki Hodgson (Mum) and Andy Cai took silver, with Yuhang Xie (Snitches get stitches) medalling at bronze. As far as team efforts are concerned, the Novice Squad took first place and the experienced team second. Robert Spencer was also awarded his blue BUTTS badge, and Sam Kitson-Platt the black badge. It seems as if, after spending an ungodly amount of the day in the range, its spirit infused every one of our team (before promptly leaving others), to grant us these wonderful successes.

Following a good day of shooting, we had the pleasure of going to Prezzo for dinner, involving the novice squad utterly confusing their seniors and a few lessons in British slang for some. Overall, it was a pleasant day of shooting, with excellent help by Cambridge University Bowmen members - I heard the playlist for the day was excellent - as were the deliveries of coffee and Greggs. 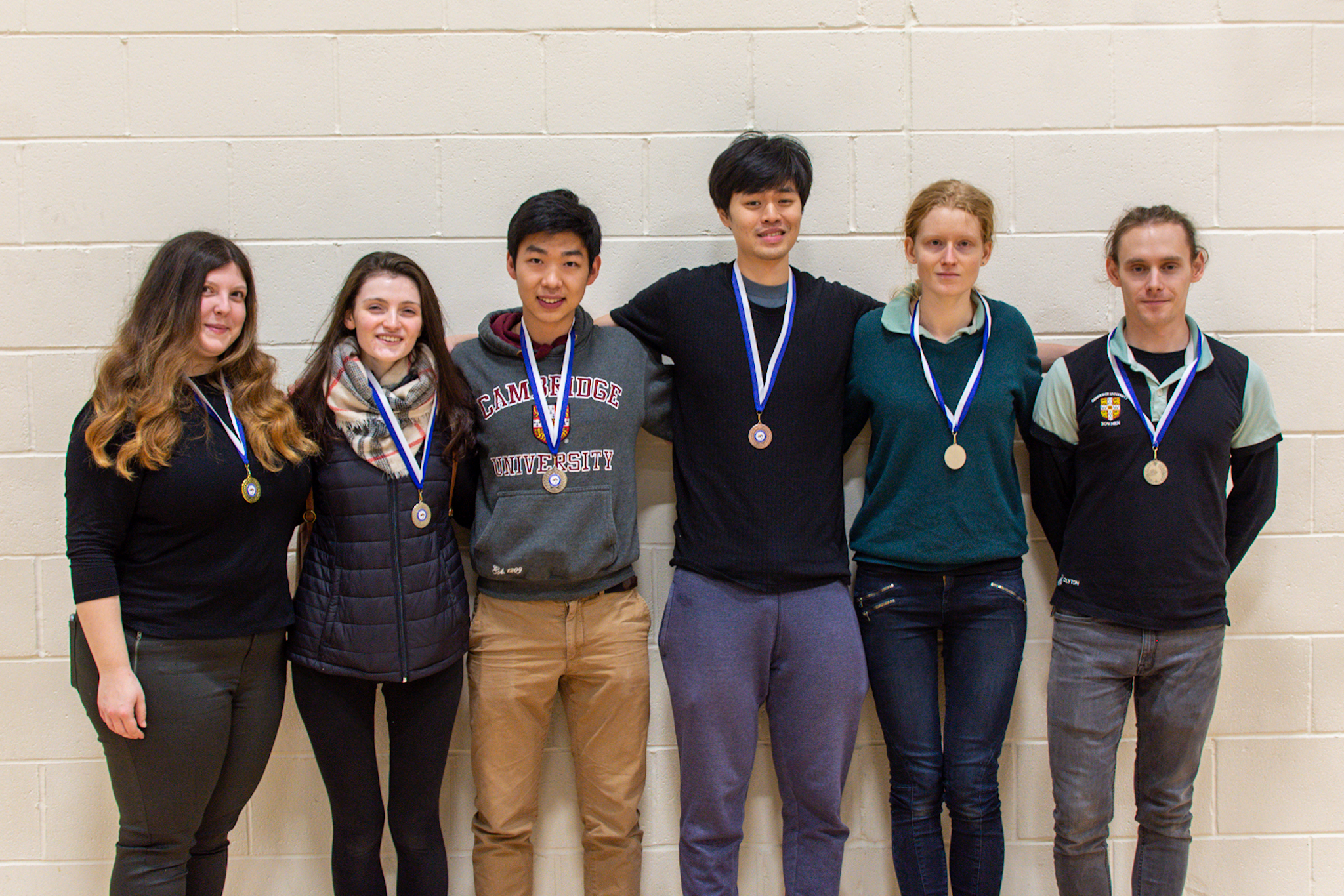 On Sunday 24 th November, a group of fifteen archers made the road trip to Leicester for the DMU BUTTS leg, sustained on the journey by a McDonalds drive-through venture.

It was a successful day of shooting and well worth the travel, with CUB bringing home a crop of medals. Amongst the experienced archers, Eleanor Brug won silver in ladies recurve, whilst Liam Pattinson won silver in the combined barebow category.

The novice team - a couple of whom were at their very first archery competition - also brought home several medals, with Andy Cai and Sean Seet winning silver and bronze in the gents novice recurve, and Vicki Hodgson and Isabella Hogan winning gold and silver in the ladies novice recurve. Much to their excitement, the Cambridge novices as a team also collectively won the DMU BUTTS leg, as well as having the highest score of any novice team across the leagues fixtures that weekend!

The day was rounded off nicely with dinner, drinks and chats with several new friends from the DMU team in the local pub (pleasantly cheap compared to Cambridge prices...), before heading home for some much-deserved rest. 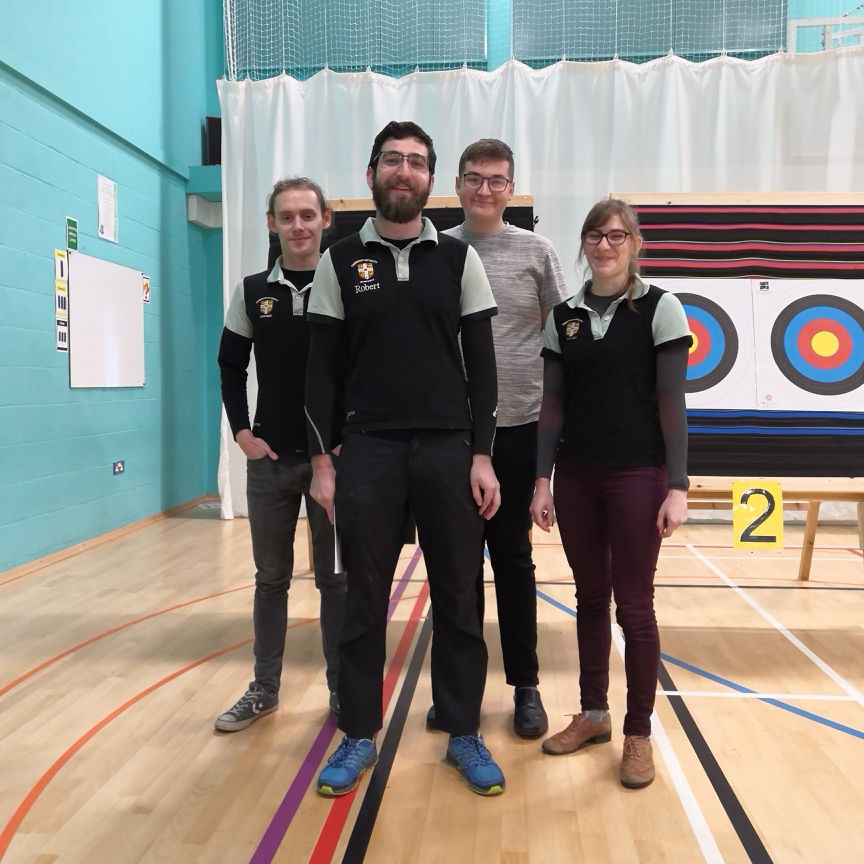 On the 16th November, four of our archers attended the Ely Archers 12th Annual Portsmouth, enjoying a thankfully short trip up the A10 to Littleport Leisure Centre (making a nice change from the 2 hour drives to BUTTS legs!).

Sam, Kimberley and Robert arrived bright and early for the first session, whilst Liam rocked up for a Double Portsmouth in the later two. A few friendly faces from local clubs Peacock and CCB were also in attendance, though no competitiveness was spared by any means!

At the end of the day, the club had a tidy sum of medals to bring home - Kimberley Callaghan won the bronze medal in Ladies Barebow, whilst Liam Pattinson won the silver medal for Gents Barebow overall, and also the gold Double Portsmouth in his category.*Recent CUB Alumnus, Jack Atkinson, was also in attendance, and claimed the bronze medal for Gents Compound for both the Single and Double Portsmouths!

In the end, the much anticipated raffle waa drawn, and despite a plethora of goodies (vegetable hamper anyone?), only Sam was successful in the post-match draw, claiming a Cadbury selection box to take back - the true prize of the day! 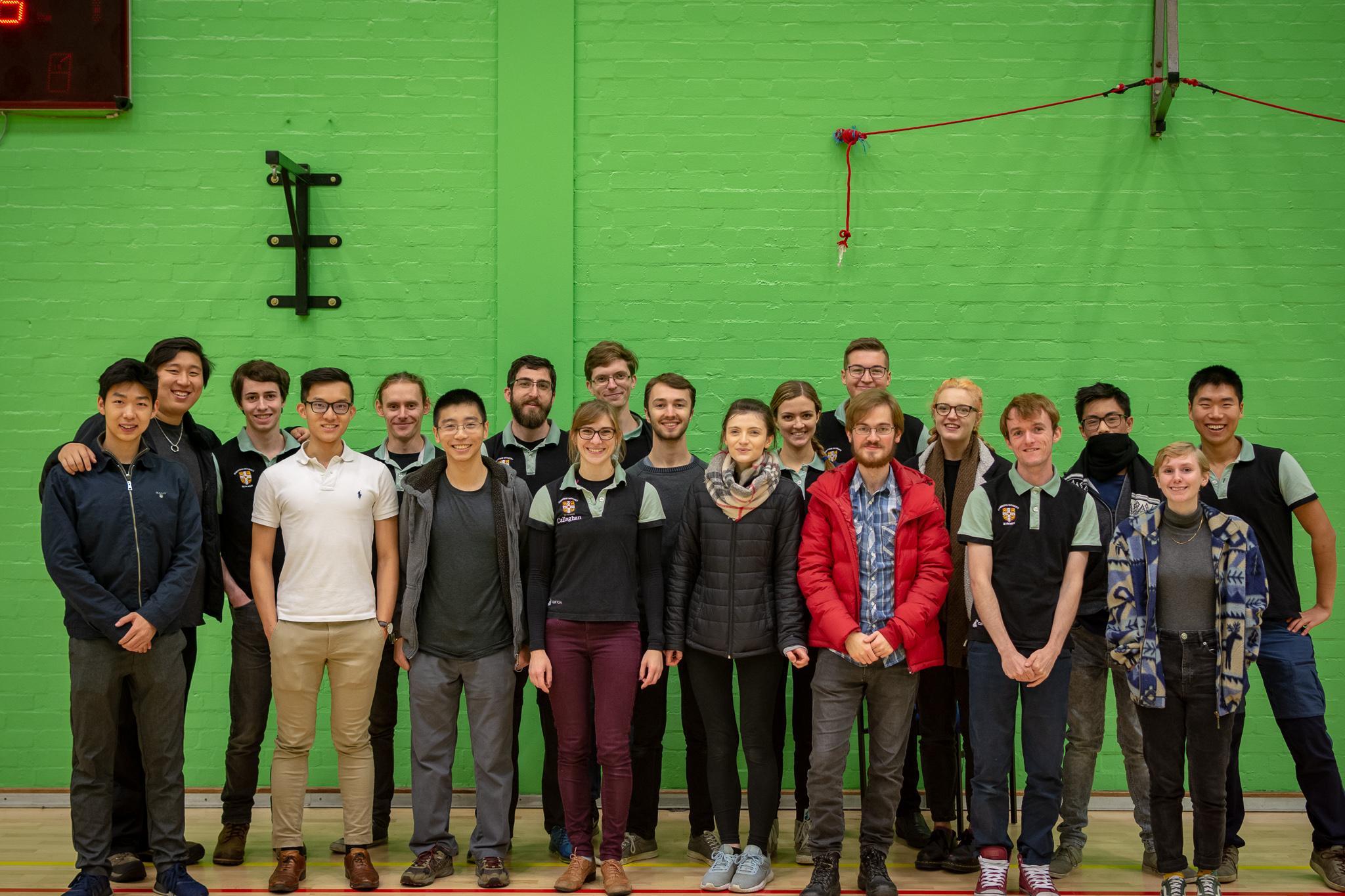 On the 11th of November the club's archers went off to Oxford for the year's first BUTTS league leg with a healthy mix of both experienced and novice archers, this competition being their first one for many archers, both experienced and novice. After an interesting trip with one of our cars attempting to enter a footpath and later getting a parking ticket, the afternoon started with the typical Portsmouth round, the only note of interest being an equipment failure of a novice's bow, requiring a pause to retie a nock point, and the particularly cold shooting conditions, leading to complaints about the temperature to each other, equivalent to commenting on the weather. In the experienced category all three of our recurve archers ended up being one after the other with highly similar scores, although no medals. The situation was a bit better in the barebow category, with Liam Pattinson winning silver (508) and Kimberley Callaghan bronze (505). Cameron Krulewski followed closely behind with 503 points. In the Novices category some very good scores were achieved - Andy Cai won gold in the Gents category with 469 points, a very impressive score having started shooting only in October! In the Novice Ladies category, Izzy Hogan achieved 3rd place and a bronze medal, with the novice team taking 2nd place overall. Despite Birmingham and Oxford having higher experienced team scores, this was just the first BUTTS leg with plenty of opportunities for the club to catch up this season. 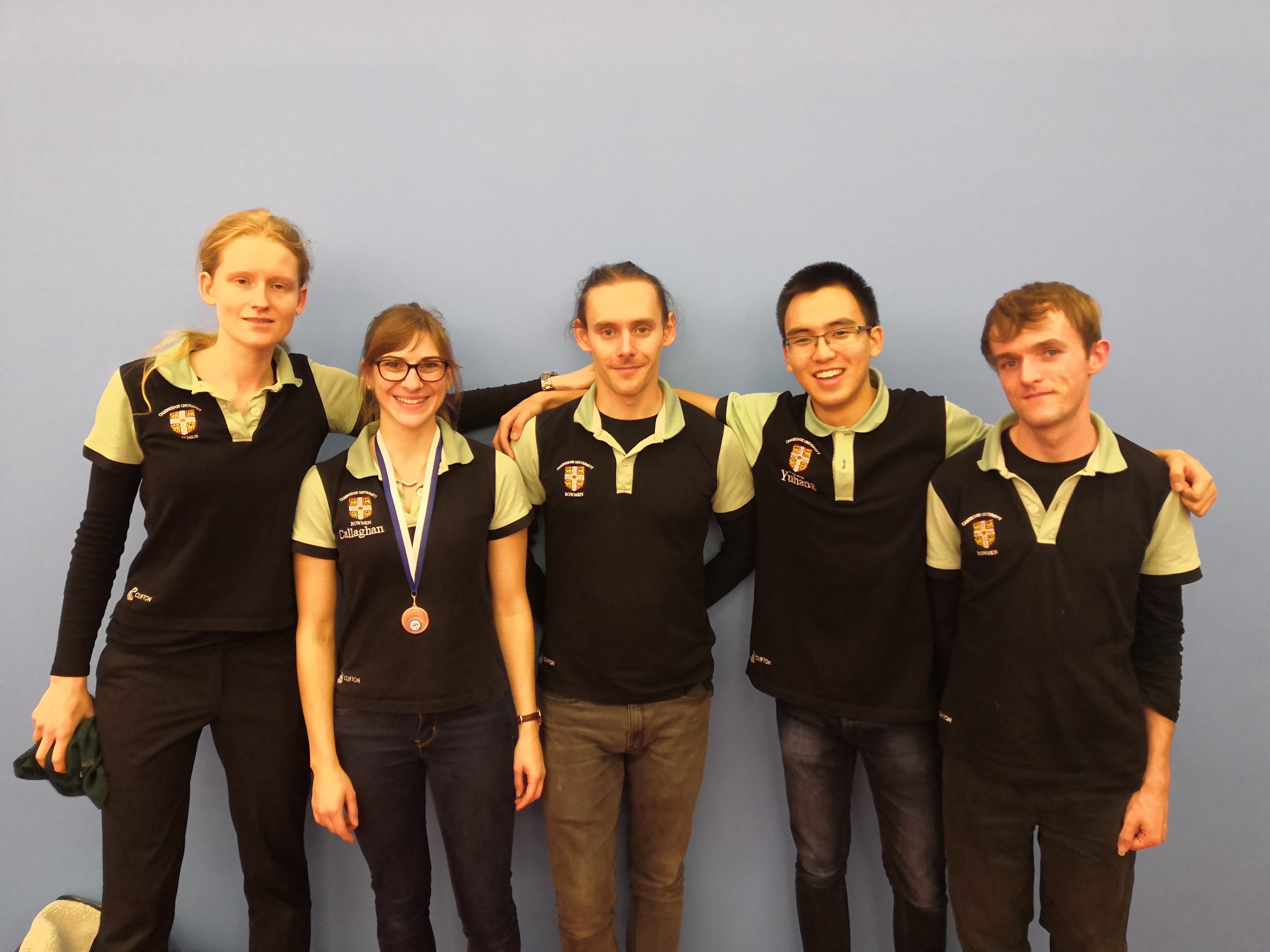 On Saturday the 2nd of November, a team of five CUB members was assembled for the legendary Banter Bowstyle Bonanza (non-recurve BUTTS champs) which comprised of a seeding Portsmouth round and a Head to Head round. Of the five, Kimberly Callaghan, Liam Pattinson, Yuhang Xie and Eleanor Brug competed in the barebow category and Andrew Browne competed in the longbow category.

The competition began with the Portsmouth round with the team finding overall success (despite some equipment failures along the way) with Kimberly and Andrew earning silver medals in lady barebow and gent longbow categories respectively. Liam came 4th in the gent barebow category, narrowly missing out a medal by 4 points. Eleanor took off her sight and competed in the lady barebow category, earning herself 4th place despite only getting sight marks in the Halloween shoot the day before. Clearly shooting at pumpkins and haunted houses made all the difference!

After a short break, the Head to Head round began with Birmingham University performing what could only be described as a war chant. However, the team was unfazed and continued to battle for the top places. Tension could be felt in the air as many head to heads came down to the last end. Just a few arrows could decide the fate of the competition. A brief respite from adrenaline was had when an archer was injured with a nosebleed. It was an unfortunate accident, but it was also a refreshing break to breathe, rethink and refocus.

Despite the fierce competition, Kimberly earned a bronze medal in ladies barebow; Andrew came 2nd in the longbow category and Liam came 4th in gents barebow. A special mention must be given to Chris Guerin, who is a CUB alumnus, earning bronze in gent compound Portsmouth and gold in Head to Heads. Despite shooting for Birmingham University, where he is doing his PhD, the team cheered for him (we're sure his success was due to his time in CUB anyway).

The team drove home to the music of Tchaikovsky's 5th Symphony, ready to rest for whatever may be coming next! (Spoilers: teaching the beginners course the next day).

The results can be found at: https://www.tamlynscore.co.uk/tournaments/butts-non-recurve-2019/results